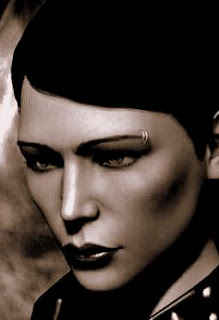 I was welcomed into my new corporation with open arms and I felt like I could finally relax and play Eve again. There were no nightmarish diplomatic situations, or recruiting obligations. (If you’ve ever tried to keep 500+ people happy in an alliance before, you’ll understand my relief.)

Back in RDA, I had  nearly snapped. I remember dealing with whiny brats complaining of others ‘stealing their rats.’ I also remember taking a corpmate into structure because he was stubbornly refusing to listen about something. (I got a little into trouble from Swoop for that.)

But, I was now free. My corpmates were relatively good small gang pvpers, and we had some really interesting wardecs in empire. They were unlike any other people I had flown with before, though. The corp consisted mostly of a group of Canadian 20 somethings who all knew each other in real life.

I found out later, as they began to trust me, that their leader was a huge scammer. He had tons of ‘official’ looking alts. He’d convince other people that he was a Chribba alt, or that he was authorized to handle Chribba’s affairs while Chribbas was ‘on vacation.’

He’d scam people---those planning to buy motherships (as they were called back then) and other large items—out of billions upon billions of isk. If you go to where Chribba has listed a bunch of people that are not his alts and to be wary of as scammers---at least half of the people on that list are alts of my old ceo in that corporation.

He told me everything he knew. How to do it. How to make the alt look and feel official. He said he was ‘training’ me. We were going to scam people and get everyone in corp capital characters. We would rule the world.

I didn’t have the stomach for it. I think he kind of understood that after a while.
Also, several of his buddies stopped playing Eve, and the corporation went nearly completely inactive.I never ended up scamming anyone due to what he taught me.

It was around then that I learned that several of my old friends from RDA were joining a big corporation named Federation of Freedom Fighters. [F-OFF] Some of the stuff they were telling me was quite exciting, and I decided to apply to the corporation. I had lots of references as I knew a handful of people, and I wasn’t quite so new anymore. My skillpoints were starting to get up there (30+ mil), and I had certainly gotten some Eve experience the last couple years.

As soon as I joined, our alliance (Executive Outcomes) began plans for heading to the BOB Max campaign front. I still remember my first week in corporation—I travelled out to 0.0, bought a few ships, was titan bridged to the front, and lived out of POSes without ever docking for weeks at a time.

It was null-sec pvp on a level I had never experienced before. Titan warfare, local spiking to over 800 people. Mass fleet fights of epic proportions.

I still remember logging on to the chaos when BOB was disbanded. I had only been in my corporation for a month, and already things were hitting the fan.

The Freedom Fighter stuck with EXE a while longer, but with the downfall of BOB, things were not the same in the alliance. We stuck around long enough to get our own titan out of the oven, then headed to low-sec to regroup as a corporation, and begin plans for reforming an alliance of our own making.

It would be named Aggression.. We had numbers. We had titans. We came, we conquered. It was complete, hilarious, fun chaos. As most know, we began and peaked and died in about a 7-8 month period of time. But it was the best time of my null sec career.

We lived in curse for a time, then began taking over immensea. We had naps with both Atlas and –A-. Many referred to us as the ‘A-Team.’

At this point, I was on horrible internet. I sent most of my time trading, running a corp shop, a separate alliance shop, as well as providing emergencies cynos for the titan in my falcon. It was a crazy schedule and I’d play for 12+ hours some day, just to keep up with things. My parents were beginning to think I had jumped off the deep end. (I continued college though.)

I’ve shared some of my stories about my life in Aggression before. How my corpmate doomsdayed my falcon by accident during an lol op. Or the time that Red Alliance got our POS password and warped their fleet into the pos shields, trying to bump us out. We changed the password, timing an old fashioned doomsday at a split second afterwards. The pos shield were plastered with their wrecks.

The good ‘ol days. But it was doomed not to last.

It all started when we were back stabbed by the rest of the ‘A-Team.’ Particularly, Atlas. There were standings resets, and things spiraled very quickly downhill.

I had been in the Freedom Fighters longer then I had ever been in any single corporation before. They were my Eve home, and I did not have the will to start again. Not after everything I had been through.

As the Alliance died, the corp also died. A bunch of people went to SOT, a Pandemic Legion pet alliance. Several went in other directions. I held on until I could not hold on any longer. It was then that I made a decision.

I would quit Eve.