Reading Rixx’s own personal reflections on his past corporations, I was inspired to write a little bit about my own past.
Jumping in with Both Feet (and Hands, and Head, and etc…)
I started Eve as a director for a small but active corporation. My brother was the CEO, so he naturally made me director when I began to play. The corp was Soldiers of Fortune United and we were complete noobs, but were immensely good at having fun.
I had to learn the ropes of Eve FAST. I was a director after all, and people expected me to know…stuff. I don’t even think I had time to do much of the tutorial.
I made isk through missions. I also fit my ships for the first few weeks from things I found off wrecks. I also bummed a little isk off my brother who had made a hundred million isk or so spying for a larger corporation. (100 million isk was huge money to us nooby frigate pilots back then.)
I biomassed my first character within a week. He was specced all wrong and I hadn’t spent any time on creating his avatar, due to being impatient to play the game. He was downright ugly. (I’m female, and I like pretty things. What can I say?)
My brother ended up buying a toon off the forums later, and I inherited Susan from him. She had 3 million skillpoints blond pigtails, and a saucy little face. I didn’t like her at first. She looked like a brat.
Perhaps, as I look back, not the worst match for me…. 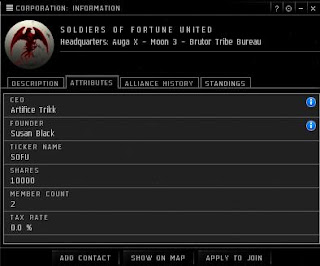 As our corporation began to progress and build up, we decided to join an alliance. We had some serious disagreements with them however. Apparently, not everyone liked to have ‘quite’ as much fun as we did. So, we left and joined a different alliance by the name of Brother’s Word.
After a short period in the alliance, my brother and I decided that corporate leadership was not for us, and that if we were going to truly get better as pvpers we should join a corporation with some more experienced pilots. Both of us, along with several other members of our alliance, joined Black Watch Legionairres, a small pvp corporation that had been up until now, an enemy.
We were called traitors……and it wouldn’t be the last time.
BWL introduced us to true, small-gang warfare. Some of the players had already been playing Eve for years. They were known for wardeccing larger alliances and driving them into the ground…even with the few players they had.
I still remember us taking on a larger fleet near Amarr. I was thrown into a blackbird to jam several specific ships. Everyone had their part. We were very outnumbered, but we won anyway.
We had an interesting mixture of characters in BWL. One guy was some sort of real life spy. There was me and my brother, several Canadians…and some others. Like I said, a strange mixture. But it worked for nearly four months.
After those few months in BWL, things started to go a little inactive. There were rumors that someone had gotten banned due to selling isk, though I never really got what was going on with all that. I just knew that I was ready for a change!
During the war with Ka Tet somewhat earlier, I had created a neutral alt to help scout out war targets. For some reason, I figured they would be less aware of her being my alt if I put her in a corporation. So, one day I sat in a station, scrolled through all the corporations that had offices in that station, and picked one.
I applied, and my application was accepted after a brief conversation with the CEO.
It’s amazing how some small thing---some little action can completely change the entire course you will take. For me, it was that random action of putting my alt into a completely spontaneously chosen corporation that happened to have an office in the station I was sitting in. 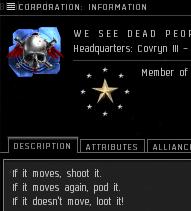 Over time, as I was scouting on my alt, I chatted with the people of that corporation. I started learning about the things their corp did, and form relationships with several of the corp members.
As BWL started to crumble, I decided it was time to move on. My brother had other plans, and I had an alt in a corporation (We See Dead People) I was starting to like…a lot.
I applied with Susan, and began a course of action that would take me all over null sec, from becoming one of Pandemic Legion’s first renters in Fountain (that would explode into a huge ball of fail drama), to joining titan conga lines with BOB in the 2nd Maxx Campaign.
All that, and more, -----coming soon.