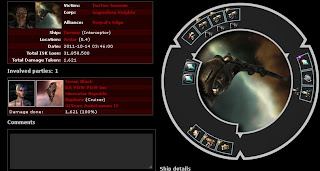 Thursday night I logged in to quiet. There didn’t seem to be a lot of targets around. I logged my alt on to do some trading, and then decided to go do some real life stuff instead. Later, I checked the killboard to see if anything interesting had been happening and found that my corpmate Gald was out in a rifter leaving a wake of destruction from huola to auga. He probably had more than half a dozen solo kills within a short time period.

I logged on and jumped into a tech 1 cruiser to go roam metropolis. I was determined that I would fly it until it blew up. After all, it is a tech 1 cruiser. I was going alone at the onstart, so I was probably going to die in a fire.

Nearly all the way to Ardar I hardly saw a soul, and nothing on scan. When I popped into Ardar there were a few neutrals in system but nothing much on scan. I decided to go look in Had, and noticed a taranis sitting on my in-gate.

Being in a tech 1 cruiser I didn’t really want to GCC on the gate so I just stared at him a while. He stared back, and then jumped through to Ardar.

There wasn’t anything else in Had, so I reproached the gate and jumped through. The taranis was still on the other side, staring at me. And then…he aggressed.

I quickly pointed him but he got under my guns, so I had to deploy my drones to hopefully put some hurt on him. As I did that, a rapier warped in and started locking me. And then a drake. And then an Amarr tengu. The taranis was neuted flat so he couldn’t burn away from me, and died in short order.

I locked the rapier and pointed it as the taranis popped. The drake was now locking me, and I wasn’t quite sure what the tengu was up to. He didn’t seem much interested in the fight.

I put my drones on the rapier, but he burned away and was webbing me so I couldn’t follow. Finally, as he almost hit armor, he ran away. The drake continued pointing me, so I started to burn away a little. The tengu left. I noticed the drake suddenly didn’t have point anymore, even though I was within scram range. He seemed to be aligning out also.

I warped away, wondering why they hadn’t killed me. You’d think a drake and a rapier could hold down and kill a tech 1 cruiser.

I let Gald know I was still alive. (He was planning to head out to metro to roam around with me as soon as his GCC was up.) When the little party had arrived while I was killing the taranis, I had expected to die so had warned him I’d probably need to run back for another ship. I explained the fight to him, and let him know stuff had run away. He was as confused as I was.

We played cat and mouse for the rapier for a while, and attempted to catch a couple Amarr BCs. But, the stars were no longer aligned and we never seemed to be in the right place at the right time. We almost caught the rapier undocking from a kickout station in system, but he made it back in low armor.

And then, I went to bed.