The Amarr Get a Taste of Their Own Medicine 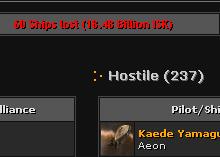 Well, Minmatar/Amarr space seems the place to hot drop the last few weeks. I’ve written a few things about the Amarr batphoning  -A- super capitals and some resulting drama it caused.
Amarr Drops -A- Super Caps
Some Resulting Drama

Needless to say, the batphoning of supercapitals has become a vicious circle. The dust is far from settling and neither Amarr nor Minmatar will soon be able to drop capitals without a null sec alliance interfering.

Today, the Amarr were hotdropped by Raiden with over 20 super carriers. Who exactly batphoned this is unclear, though most of the Late Night pilots were afk or asleep during the fight, and did not hear about it until after the fact.

According to the battle report, the Amarr lost 2 Archons, a Phoenix, a Revelation, a Thanatos, a Nidhogger a Loki, a Legion, 10 Abaddons, many other battleships, several tech 2 ships and a bunch of smaller things. Losses estimated at 18+ billion isk. Before being pwned by the supercaps, they managed to kill several capitals themselves, including 2 Phoenix, 2 Nags, and a Thanatos.

The Amarr response? According to one of the Amarriance FCs, the Amarr were "laughing about it."

All of this came after last night's fiasco where multiple dreads and carriers of the Amarr were dropped on a Minmatar POS in Auga. We were forced from the field, and lot many battleships, though the battlereport does not reflect the numbers of our fleet by a large margin. (Most of our fleet never got on a killmail.)


The Amarr fled the field before finishing off the POS. Whether they became aware of our numbers and suspected a hot drop, or because they became bored with our lack of dropping capitals on them, we do not know.

The POS and POS modules were graciously repaired by several Minmatar triage carriers later in the evening.


It's clear now, after the engagements of the last few days, that the Amarr were trying to dissuade us from dropping capitals. Instead, they have made the region a target for null-sec alliances looking for capitals to hot drop. And, they haven't really dissuaded us.

The Minmatar will continue to drop capitals, but will do it on their own terms. In the meantime, we will continue our small gang, leory-ninja pvping.

Oh, and be carefully where you park your neutral Orcas.