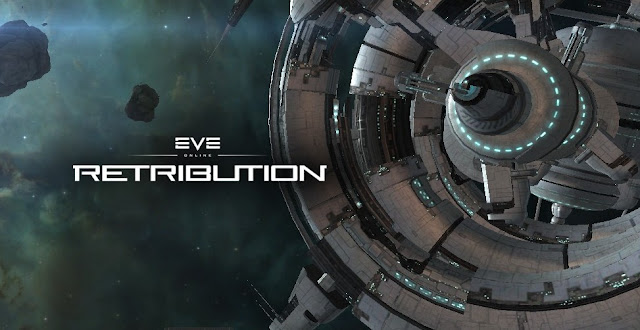 Much changed in the weeks I was absent. To be honest, I wasn't sure what I would find when I logged back in last night for the first time. Retribution was several days old, and last I had heard the Amarr were gaining momentum --as Late Night and Minmatar allies Ushra'Kahn plunged into a bloody civil war.

Shortly after logging in, I jumped into a cruiser, unsure of whether I was even fitting it correctly anymore, with it's new slot setups and completely new CPU and Powergrid configuration. But I was in a hurry, so I slapped on what looked good and jumped into the fray.

The Amarr dropped over 40 people on us. They baited us with a forward gang, hanging some low hanging fruit in front of us that they knew we could not resist, and then our overviews exploded as the entirety of their force came rushing in.

It was nothing new, I was told. Almity fleets were "organized" and "skilled." In order to defeat them, we would need more numbers...and no more half-assed leroying in miss matched ships. We needed to theory craft. We would need organized logistics and specifically fit ships...

I pinched myself. Who are you people and what have you done with my alliance mates.

Wex dropped a subtle hint that Ushra'Kahn had a fleet out nearby, and it was quickly decided that if they were willing, we would get them into fleet, and onto our coms.

Gritz, our Alliance liaison, opened up communications with UK and within 15 minutes they were in our fleet with a Wing of their own, and on our coms discussing possible solutions. I admit, my respect for them went up a bit after that. The ability to treat EVE as 'just a game' and jump into a fleet with people you were very recently bitter enemies with is rare...

At one point, we discussed the possibility of staging a LNA vs. UK 'battle,' luring the Amarr in to fight what would look like easy pickings of a militia at war with itself. But, carefully placed Amarrian scouts prevented that from ever happening, so we stationed all 40+ of ourselves into a plex in Kourmonen and waited for them to come.

Weeks ago, if you told me a Minmatar fleet had 40+ people sitting in a closed plex in one of their home systems, waiting for an Almity fleet to come at them, I would have laughed in their face. You're never going to get a fight with that bro...

But tonight...it didn't take long. Local spiked, and we quickly started to notice the Amarrian fleet on short scan near our plex's gate. They sent in a fast frigate to assess our setup, and shortly after all hell broke loose as they piled into the plex.

The battle raged and after about the first 10 minutes it didn't look particularly good for us. Our logistics were having trouble locking people in time to save them, and the enemy logistics were hard to break through. As time passed, the tide turned a little, and it became a race to see who could switch targets fast enough to save or kill the opponent. Ships were picked off here and there, as each side clamored to keep up their logistics chains and focus fire on quickly changing targets.

Part way into the fight, a contingent of Caldari positioned themselves on the outside gate, killing both Minmatar and Amarr as they attempted to provide reinforcements. One of the Caldari claimed later that they killed dozens of ships belonging to either side trying to get back to the fight.

As the fight stretched on, many pilots started running out of ammo. We moved around the field attempting to pick up ammunition--all while trying to keep up with Galdornae's target calling, and keep an eye on who was getting primaried.

I probably looted 5+ wrecks during the fight in an attempt to feed my guns.

People who lost ships quickly reshipped and started coming back in small contingents, to get through the Caldari camp on the gate. It appeared the Amarr were doing the same thing --coming in small groups. As we broke through their defenses, a new wave would arrive. As we started to dwindle on field, reinforcements would arrive.

As the battle exceeded well over an hour's time, several people started joking in local that we should press pause and take a quick bio break. The field was being rummaged through by both sides for cap boosters, ammunition, and extra drones. Our second target caller, Galdornae, who took over when our first couldn't call anymore, had been calling targets for over an hour straight, and was starting to sound a tiny bit hoarse.

People were getting so low on ammo, he started calling targets of ships that he knew would have the ammo types we needed most....lol!

After a good hour and a half, the Amarr finally left field. People on coms cheered to have held field, even though it was not an obvious victory for us.

It was by far the longest fight I've ever been in, and will probably make the history books of Minmatar/Amarrian engagements. People will talk about "that time where the fight lasted an hour and a half" for months to come..

Some discussion was had about whether logi cruisers are extremely overpowering or not. They definitely change the game in many ways, especially for Faction War pilots who fight inside restricted plexes --you can't simply bring bigger ships to break them. While the fight was intense, and wildly fun, during certain periods it bordered onto a stalemate with neither side really able to break the other. It will be interesting to see how this develops over time, as people start coming up with new fleet doctrine's and approaches to countering each other.

Anyway, it was a good day to come back to EVE. Crazy politics...insane internet spaceships battles....and hours of strategizing war-theory talk. ..

I hope it is just the beginning.