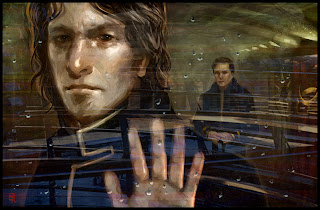 Minmatar scientists recently uncovered a crashed Amarrian research vessel on one of Huola’s moons. Oddly, it appears to be a model that currently doesn't exist yet, and onboard systems seem to indicate the ship is from the future. While not much technology has been recovered so far due to the ship being highly damaged and degraded, some journals and logs were discovered that are thought to be the pilot’s personal accounts.

While the Amarrian writing dialect used was strange and much had to be translated by scholars before it could be understood, the analysts were shocked to find accounts detailing encounters with ships and technology that doesn’t currently exist yet. Furthermore, politics and other mentions indicate a far different Universe then we currently live in.

While some of the accounts have been filed as Top Secret and will only be released to military Officers with the necessary clearance, some were recently released to the Minmatar public, and will be shared here.
Analysts predict that the accounts could be from a timeline that no longer coincides with our own, and possibly hasn’t for some time. However, the descriptions and events of time not yet upon us are quite inspiring for the occasional daydream of what could be...


Excerpt from the translated entry labeled as ‘847-B’

“Ready to jump in ten. Ten…nine…eight…” a shiver of excitement ran through me as I prepared myself for the upcoming jump. Our coms were tight, and the FC’s voice was all that was heard, but I could still sense the simmer of excitement running from several hundred pilots awaiting the mad launch across lightyears of space into the bloody fray that was already underway.

To think that long ago we probably would have been approaching a Titan and waiting for a general cyno. Times have changed since then, thankfully. With the advent of the Mothership and improved cyno technology resulting in Advanced Cyno Field capabilities, vessels can either traditionally bridge, or simply latch on and enjoy the ride. It’s no wonder Titan manufacturers stopped building bridging capabilities onto Titans long ago.

A flash of light and a deep rumble exploded across the sky as the Mom and its party launched into the jump. We did not arrive instantaneously –jump time being dependent upon the distance we are traveling.
“It looks like we’ve lost three.” I cringed as the FC utters a few curses. [Edit’s note: Actual swear words are thought to be in the dialog here, though modern words were not found to directly correlate.] Once you latch onto a Mothership, you can’t unlatch until the docking timer is complete, and at that point you’re automatically shoved off. If jumps are not timed correctly and pilots latch on too early, they could be lost mid-jump and find themselves stranded in a random location between the Mothership’s origin and destination. It’s never happened to me yet, and I don’t plan to be one of the unlucky ones who have to make their way home alone in hostile territory.

Another flash of blinding light announced our arrival. I was vaguely aware of the time dilation we were thrown into almost immediately as we landed. Our timers were up within 10 seconds and we ‘almost’ all unlatched simultaneously. We’ll have to coordinate that a little better in the future—perhaps some more training drills.

“Remember, stay within range of your designated Mothership, and listen for the command to dock. [Editor’s Note: The term ‘dock’ is frequently used through various portions of the texts, but it has a very different connotation then modern docking principles, and seems to indicate a sort of pseudo-docking capability.] Do not dock unless you are told.” Keeping within range of the ‘mom’ is important, as a Titan’s area of effect doomsday could quickly wipe out a portion of our fleet if we did not pay attention. These area of effects are pretty small, but brutal. Latching onto the Mothership protected us –temporarily, as we make use of the Mom’s superior shield capabilities.

I listened carefully as primaries were called, and zoomed out a little to look at the battlefield around me. It was crazy! There were several enemy capitals fleets with significant support. It also looked like they had a Mothership on field, but it was at least 100k away from me. There were several friendly moms on field nearby and scattered out. The battlefield was a mess.

“Titan on field.” The FC’s voice was sharp and we all wait as he surveyed the tactical overlay to determine where the Titan was landing.

I was in wing one, and was glad I was still in range of the Mom. I quickly latched on, settling beneath its protective shields.

A few others were not as fortunate, and their slow timing cost them their ship. A few wrecks were all that remained after the sharp light of the Doomsday subsided.

“Titan is grounded.” The FC announced. After a doomsday, a Titan can’t move for around five minutes in order to recharge and regain power needed for normal operations. Five minutes was enough for the surprise that we had. We were fully prepared—and ready for their titan response.

“Cyno Charlie engaged. Dread squads Five and Six jump now. Dread squads Five and Six jump now.”
The nearby cyno was only up for seconds before two squads of friendly Super Dreadnaughts jumped through. The brother of the notorious Super Carrier, Super Dreads are empowered with weaponry comparable to the firepower of a doomsday but focused and deadly—however they are also very fragile and could break easily under the fire of battleships and regular dreadnaughts. They’re meant to get in, get as much firepower on nearby super capitals or super structures, and get out before the enemy could bring in support.

“Primary that titan.” I smiled as my ship automatically unlatched. With over two dozen friendly Super Dreads on field, the Titan had no chance. I quickly locked onto the targets and began adding my damage to the far superior damage of our capital fleet. I admit I giggled a little to myself. An enemy titan was about to go down!

The decree sent a cold shiver of dread through me—even me, a veteran of this war for how long has it been?
“Multiple Hostile Motherships landing, support--prepare to engage.” The FCs voice was sharp with stress.
Our Super Dreads were sieged and could not move for several more minutes. The titan was breaking, but Motherships meant hostile support—and that was bad news for those dreads. They would be toast in little time at all with their glass cannon shielding and armor.

“Wing Two prepare Microjump drives. Keep in range of your designated Mothership in case they have another set of Titans coming in.” Wing Two was a significant distance across the battlefield, fighting with some hostile support.

Three hostile Motherships landed in very short range of our Super Dread fleet. Along with them dropped a considerable amount of regular dreadnaughts and carriers that immediately went into triage/siege on the struggling Super Dreads. Within less than a minute, the enemy sub capital fleet disengaged from their Mothership and my overview was flooded with hostile targets. Their in-sync movements said that they were highly organized and very coordinated. [Editor’s Note: The journals frequently mention a very “organized and coordinated” enemy that this pilot seems to be frequently fighting, but we’ve currently been unable to correlate the accounts with current political parties.] Our FC cussed a little more over coms.

“Wing One Dock. Wing One Dock.” My eyebrows raised when I heard the command but I obeyed immediately. After the command was given, it was common sense what we had coming but I was still surprised that the FC pulled it this soon. Things were about to get even more interesting.
“Two Advanced Cynos are up, jump NOW to designated locations.”

“Keep coms clear, guys.” The FC sounded stern, but you could tell he was also impressed by the shiny exploding lights.

“Doomsdays are up,” one of the Titan pilots alerted the FC.

Our entire second Wing, which was easily 200K or more across the battlefield, micro jumped across the span to land in range of the hostile capitals and began lighting them up. We had already lost two Super Dreads, but were trying to protect the others before they took out a third. Our timer finally was up, and Wing 1 disengaged from the Mothership and joined Wing 2 to eradicate the hostile capitals on field. Many of the hostiles were still in triage and siege and wouldn’t be able to disengage. They were in serious trouble since around 60% of their support had been DDed….

The Mothership from across the field that had been with the hostile support group that Wing 2 had been fighting was Microjumping across the field to provide additional support for their now floundering capitals. They timed it perfectly. Mere seconds after landing on top of us, the hostile Mom’s fleet disengaged with perfect timing and my overview was once again flooded with nearby targets.