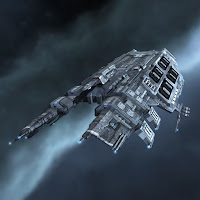 Late evening Saturday was quiet. The Battle of Tannakan had taken place earlier and there didn’t seem to be a lot of Amarr out and about. Most of the people on in Minmatar channels seemed mostly afk.

I decided I’d take a jaunt around the block anyway, just to see if I couldn’t find something interesting to kill. I made it to Vard in my Fleet Stabber without seeing much of anything that was actually moving. In Vard, however, there were two wartargets in system, and two drakes on scan.

I quickly let Gald know. He was kinda active and I knew I wouldn’t be able to dps through two drakes by myself, even if I might be able to tank them both.

“Vard? That’s so far away, Susan…” Gald was kinda grumpy about having to leave Huola.

I kept scanning as several neutrals also jumped in, mostly in frigates that I ignored. Oddly, the wartargets seemed to jump out. I hit my scanner again to see both drakes still on scan, still on the 5-degree angle toward a belt that I had had them at before.

“Gald, the wartargets are gone, but the drakes are still there…”

We decided they probably had logged. Unless they had been aggressed by something, they’d disappear shortly.

I ran my scanner a minute later, and they were still on scan. Bingo! Gald started to burn toward Vard with his probing alt and another Fleet Stabber. Jumping into system, it took him a minute or less to scan down the first drake. He warped himself there, then warped me to the second one so we could get aggression on both of them.

As I was in warp, my target-drake logged back on and was gone by the time I landed, so I scurried to warp to Gald to help him kill his. (The drake was almost out of shields, so turns out he didn’t need much help.) As we hit the poor guys armor, he logged on.  I started giggling when he locked me.

What a horrible feeling to log on in space to have two flashy pirates taking your Drake into armor…there was literally nothing the poor dude could do.

We finished him off, and he made some good-sport comments in local. I still don’t think he very happy though. Gald then started to probe the other drake, but he was a bit skittish, with good reason—we had just killed his drake buddy. Or perhaps, it was the same guy and the other drake was his alt. We considered that possibility as well.

Oddly, there is a station in Vard, so all the guy had to do was dock. Instead, he moved quickly between several safe spots, never allowing Gald to catch him.

At one point, Gald thought he had him, and warped our little gang to the spot. Just as we arrived, the drake warped out. (Little gang meaning our two Fleet Stabbers and the prober. The rest of corp seemed somewhat asleep in Huola.)

We sat there while Gald continued to try to probe him, laughing about the other Drake. What funny timing that the guy had logged in as we were killing him. That was certainly a first for me.

All of a sudden I saw a flashy target on my overview. It was the other Drake! We were sitting in his safespot, and he had cycled back to it. Not only that, but he warped at 0, landing right on top of me. I got a quick lock and scram on him, then told Gald in channel in case he was still probing on his alt. He said he had a scram too…and laughed a little.

The second drake didn’t say anything in local, but did try to fight back by attacking Gald. Unfortunately for him, there was no way he’d take on both of us, and he couldn’t break Gald’s tank.

As we were killing him we could only laugh at our luck. Ironically, Gald had been probing him down at the time, but it turns out all we needed to do was sit still, and he’d come to us…eventually.

So, let that be a lesson to you. If you are being hunted by evil pirates who are probing in local, just dock until they leave if you don’t want to engage them. If docking is not an option, don’t warp to the same safe spots at 0! As you are warping, make new safe spots, or at the very least warp to every safe spot at various ranges.
Also, don’t log in space when you have aggression and there are obvious hostiles in local looking for you.