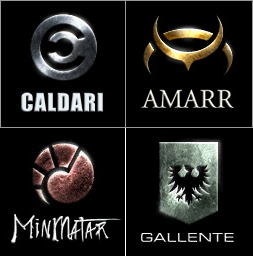 Over the past few months, I’ve gotten a lot of general questions about faction war. So, I’m going to attempt to put together a sort of general overview so that those who have never participated in FW can gain a better understanding of the game mechanic—and better understand the issue that FW pilots are currently dealing with.

Faction war is split into 4 races. The Amarr and the Caldari have permanent, standings ‘war-decs’ against the Minmatar and the Gallente. The ‘brother’ factions who are not fighting each other are neutral to each other.
On the outside, being in a militia looks similar to being in an alliance. This is far from true. The only similarity is the fact that all of militia shares a permanent militia channel.

Militia mechanics are pretty much 100% run by NPCs. There is no militia mailbox, no player ability to modify militia controlled stations, etc. Militias can’t own space, can’t participate in alliance tournaments, and cannot do pretty much anything that player owned alliances can. The chat channel, and a shared color tag is the only similarity to general alliances.

Also, the atmosphere of militia, unlike what most people think, is not like an alliance. There is no centralization of organization. Though some militias come up with their own killboards and voice coms, there is not the general unity found in player owned alliances.

Any references to militia are usually grossly generalized. This is not necessarily a bad thing, but it is important for people to understand. There are a multitude of play styles, skills levels, and groups within each militia. When another faction, or neutral party claims to have ‘fough XYZ militia,’ they have probably only experienced a couple of corporations in militia and not a unified front from the militia as a whole.

Come back another day, another time, another location, and fighting the same XYZ militia may yield a completely different result.

The allowance of ‘anyone’ into militia further adds to the lack of unification. (Again, not necessarily a bad thing, just an important fact to take note of.) Because anyone with certain standings can join general militia, there tends to be a great divide between the general militia corporation and player owned corporations. In many cases, people in player-owned corporations minimize their militia chant channel, and never interact with general militia.

Player-owned militia corporation interaction can range from all out avoidance, to general cooperation, or even very close knit cooperation. For example, when I was in the Amarr militia, most of the main pvp corporations interacted on coms, but still did mostly their own thing. We have some of this in Minmatar, but we also have some tightly-knit groups (LateNight) who almost operate as a single corporation.

In high-sec, each faction has its faction police that will shoot members of a warring militia. For example, if you are in Minmatar militia and you roam into Amarr high-sec you will be shot by the Amarr police. The police are not equivalent to CONCORD police, as some might assume. Though they can make it very difficult to do anything in an enemy’s high-sec, it is still possible to run through in a fast ship, or gank targets one system in with larger ships.

Faction war, in general, is located in each faction’s low-sec systems. Faction war missions and plexing is all located in low-sec.

Because of the role-playing nature of faction war, and it’s location in low-sec, there is a strange mixture of NRDS anti-pirates and hard core -10.0 pirates in faction war.
This is important to consider this when looking at any ‘fixes’ to faction war. For example, there has been some debate as to whether taking the Faction police out of high-sec would be a good idea. Many from the pirate group are concerned this would shift pvp to high-sec systems, making faction war pvp extremely difficult for pirates.

A large percentage of people join militia for the missions. (For example, we as a pirate corp don’t really need to be at war with our targets in order to shoot them. We remain in militia for access to faction war missions as a way to make isk during the down times.)

Investing in other things may allow you to gain even more ISK per lp.

Someone grinding faction war missions for a few hours can easily make several hundred million ISK. This can reach to a billion ISK or more for more extended periods of mission running.

Many run these missions in stealth bombers or other fast ships—relatively at low risk.

In faction war you have the ability to take the opposite faction’s systems by participating in PLEXES located in low-sec. In these PLEXES there is a countdown timer (of different lengths depending on the size of the plex) that will count down when a player is within range of it. A player must remain in range of ‘the button’ and defend against any NPCs that appear in order to take the plex.

Running plexes is a very easy way to acquire standings in a short period of time. (A corpmate and I ran plexes for an evening and each of us gained several points, and several promotions worth of standings in the early stages.)

Faction War PVP is some of most diverse pvp in Eve.

First, you will see a variety of skill levels, from complete noobs trying pvp for the first time in the general militia corporation, to elite pvpers.

You will also see a variety of pvp styles ranging from guerilla hit and runs, solo pvp, to all out capital battles.
You will see role players and pirates. Tech 1 cruiser pilots and Black Ops gangs.  You will see just about everything.

Faction war PVP is the most purposeless PVP in Eve.

In general, PVP in faction war happens just because ppl want to pvp. Though sometimes it will occur in defense or offense of something, and sometimes there will be POS warfare, etc. most of the pvp that happens in faction war is just for the sheer heck of it.


And that, my friends, is Faction War in a nutshell.