Amarr/Minmatar Have First Major Cap Fight Since PL Moved In 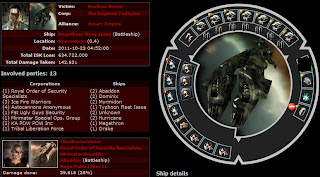 Friday night tensions turned into all out battleship and capital battles between the Amarr and Minmatar militias. The main cap battle started as the Amarr dropped a lone chimera onto a Minmatar battlecruiser gang on the Huola gate in Kourmonen. We immediately went for a point, but were quickly outnumbered as the Amarr brought their bs/bc gang in to defend the capital.

As several tried to get back to keep points on the carrier, many Minmatar were picked off (I lost a hurricane and a typhoon), and it was soon obvious that the fight would not go our way until we reformed and replanned our strategy to take into account the Amarr’s numbers.

We reformed with a couple triage carriers and some bses and bcs to slaughter the Amarr on the field until they subsequently fled. Between the two fights, it was pretty much 50/50, even thought the Amarr warped a Navy Megathron to the gate in low-armor at the beginning of the second fight, and subsequently lost it. (Pred claims to have made a profit off the loss ;) Several of the kills/losses on the battle report were from unrelated skirmishes that happened around the same time.

Although caps were used, no capitals were killed or lost during the fight, and only 1-2 neutrals were involved in the fight in any major capacity. It was the first major Amarr/Minmatar fight involving capitals since PL moved into Amamake over a month ago.

The Amarr/Minmatar had several other minor skirmishes during the weekend, including a failed black ops drop by the Minmatar resulting in no kills on either side. It was, however, fun to try.

One of the battles, much later in the evening on Saturday, turned into a 3-way as several neutrals engaged an Amarr vindicator on a gate, and the Minmatar arrived to take the field. Unfortunately, the vindicator got away before the Minmatar could get there to point it. The neutrals started shooting us however, as many of us are pirates, and we quickly squashed their drake and two hurricanes.

Overall it was a fun weekend of small gang pew. GF Amarr. (And neutrals, come again!)