Amarr Kick Members Who Die Repeatedly to Minmatar Over the Weekend 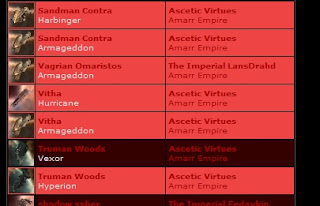 PVP on the militia warfront kicked butt this weekend. Friday night, a small LateNight gang prowled around for several hours, resulting in more than a full page of random kills on the front page of the killboard.

Several of the people we killed came back for seconds, and we ended up killing them again. And again. This led to some drama in a newer Amarr corporation, Ascetic Virtues as their efficiency on their killboards dropped by 10-15% in one evening. 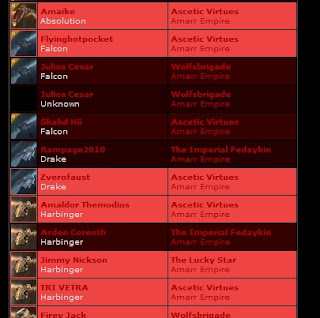 As some of their leadership logged on to some of the channels I was in, I was amused as at least one of them completely flipped out after looking at the killboards and seeing the efficiency losses. Subsequently, several of the repeatedly dying parties were immediately kicked from the corporation, and several of us Minmatar amusedly watched as several previous wartargets turned neutral in local before our eyes.

Apparently, according to several members of the corporation, the kicked members were trolled to death in their corporation before being kicked, although the chat logs were unfortunately not provided.