The Invasion of the Gallente 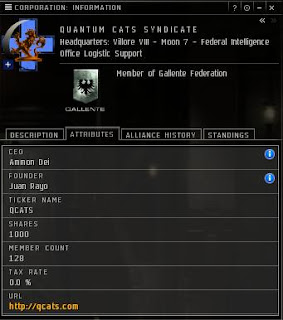 This ‘invasion’ has had its benefits as there is usually a fleet to join during the USTZ evening hours. They also have Ventrillo servers for more easy communication, an expansive network of blues to batphone if needed, and an FC that is one of the best target callers I have seen in faction war to date.

However, the addition of so many new pilots does not come without its problems as well:

In the past, we usually could muster enough to take on the Amarr, either with equal or slightly less numbers. (Sometimes we even did it with significantly less, though that doesn’t always go well.) Now, we have an extreme unbalance in the area with the Minmatar/Gallente holding a firm reign on being able to put together more numbers. Often times, there are so many of us around (whether we have a joint Minmatar/Gallente fleet or not) that the Amarr have become extremely skittish and will often not engage.

Secondly, a lot of corporations in Minmatar (the good ones) aren’t really interested in acquiring an entire host of blues. However, many pirates and neutrals in the area have been frequenting our joint Minmatar/Gallente fleets due to their blue standings with QCATS, making it difficult to determine whether we should be killing them in non joint fleets. Are they helping the Gallente kill the Amarr at that time? Are we thwarting a fleet that we don’t know about?

An x-CEO wisely advised us back in Locus Industries to “shoot first, as questions later.” It has started to become the general attitude to continue killing in a NBSI way, unless the individual is in our own fleet, of course. I’d say that it’s easier to get forgiveness then permission, but in this business of killing, neither one really factors into the equation.

In the end? I predict a couple of things potentially happening:

First of all, QCATS may eventually get bored and leave. Last night, I joined a QCATS fleet only to listen to them going on a merry chase of the Amarr around and around system, in and out of neighboring systems, and eventually ending with the Amarr docking. The Amarr would warp in at 50-150k, align out at great speeds, then warp away if anything came close. This behavior was infuriating to QCATS, though its relatively expected behavior to a lot of us who have been in the area a while and know how certain Amarr FCs behave. I could tell instantly that due to us outnumbering the Amarr nearly 2 to 1, and their current behavior, that they didn’t really have any intention of a straight up engagement.

The presence of the QCATS may also change pvp in the area. Previous to their arrival, we did a lot of small gang stuff, and only had a major BS fight once in a great while. Last weekend, there were 3+ major BS fights. We even dropped capitals during one such fight, which seemed to have been happening more rarely before the Gallente arrived. The Amarr may come to expect that during every engagement, there is a dozen QCATS around the corner, or a massive fleet of our own waiting to drop by. They may wait to engage until they have extremely larger numbers, and the number of smaller fights may go down over time.

Only time will tell what will happen. Maybe, Amarr will get an influx of new membership and we can all be big and blobby like the Gallente/Caldari always was. Though, if that era ever comes, it may spark a lot of LateNight® turning to additional wardecs and more brutal piracy to get the old fashioned, small gang fights we’re accustomed to