Every corporation goes through phases. Some last longer than others, and all eventually pass. However, a long phase of inactivity can cause a corporation to spiral downward, and to even close its doors. It’s the ‘unseen enemy’—the silent foe of CEOs everywhere.

It usually turns into a vicious circle, where the active pilots you seek will not join due to your inactivity, and your inactivity can not be resolved until you recruit more active pilots. Though getting some new voices into the mix could be a perfect way to mash things up enough and perk some interest, it should not be the only thing that you do to increase the activity of your corporation.

For starters, you need to identify the problem. Are people bored? Does your corporation not have challenging enough goals? Is there a lack of leadership? Is it just a temporary problem due to people having real life stuff going on?

Once you identify the problem, you can make better choices on how to fix it—choices that will help the corporation in the long run, and not just through the current problem.

One way I’ve seen corporations battle inactivity is to do something different—completely different. This could mean moving to a new region. (Often times an empire corp will choose to move to null-sec, or visa versa.) Corps reset their allies, or become pirates. They start a new wardec or ally themselves with new friends against new enemies. This often might work for a time, and may also help your recruitment efforts. Pilots like corporations that are ‘doing’ things.

Many corporations join alliances to alleviate inactivity. They hope that they will be able to ‘borrow’ from the alliance’s resources—leadership, fcs, gangs, etc. They are under the impression that the alliance might do some of the ‘hard work’ for them, and provide the necessary background for the corp to grow again. This is a very dangerous solution as often times the corporation ends up relying too much on the alliance. If the alliance falls apart or is dissolved, the corporation isn’t usually that far behind. 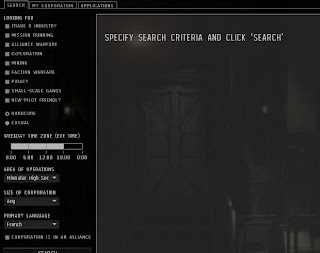 There are a few things that CEOs and others of inactive corporations rarely consider. This includes merging with another corporation, instead of joining an alliance. This could greatly weed out who is still playing and who is not, as well as provide some new ‘ground’ for your players to walk. However, CEOs don’t always like giving up control of their corporation. Even though they do not want to put in the work it would take to make an active, thriving corp, they also do not want to be dictated to by others.

Sometimes, a corporation has run as far as it’s going to, and it’s time for it to close, but the few members left hold onto it, hoping that something will change. Sometimes, you just have to let go, and look for greener pastures.

And sometimes, you have to stop complaining about there being nothing to do, and start something.