Bears, and Deer, and Crazy Looking Lizards, Oh My!

Lately, I’ve mostly been roaming around the Trollshaws, as well as some in Evindim. I love the Trollshaws because I am a hunter, and a woodsman and there’s tons of things to kill for hides, and lots of wood. I recently found a little camp that has some great tasks, as well as a bunch of quests. Things had been getting boring because quests seemed few and far between in the woods, and a lot that I did find seemed to be a little too hard for me, or meant for an entire fellowship. 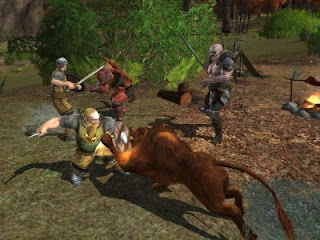 Speaking of quests…after doing a lot of quests over the past few months, they are starting to feel similar. Pick these up, kill x number of these deer, etc. Even the monsters in each region are starting to look alike, just with a different color and a different number above their heads. I knew I would eventually get sick of LOTRO simply for the lack of higher strategy stuff. I started working on making money…another aspect I like in mmos, and got bored pretty quickly due to how much money I was able to make in such a short period of time. It was too easy, too predictable, etc.

So, if anyone knows of something interesting in LOTRO that requires some brain power and a little strategy (and wont take my five minutes to figure out) please let me know. Level 41 Hunter Elf, looking for work.