There's always that 'one fight when...' that you tell people about that always remains the favorite. I have several such fond memories...strange fights where I should have lost but won by a sudden stroke of luck...times where I got out in 2% hull...or just plain good old fashioned small gang fights with relatively even odds and 'gfs' all around. 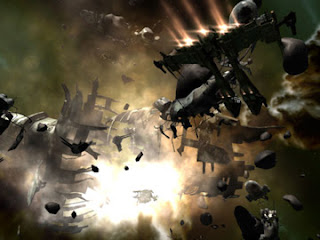 However there's one...that I will never forget.

It was kind of a strange day for pew pew. One of those times where the enemies kept shipping up to blob us...we'd ship up to match...they'd ship up again, or we'd skirt around each other, etc. Our fc was getting somewhat impatient, and finally decided to put it all out there.

Now, you have to understand, 'putting it all out there' was not saying much for us. We were a small 30 manish corp with about 15 in fleet...at least 5 of which were alts of those dual boxing. Normally, we flew tech 1 cruisers or gank battlecruisers, so 'going big' meant we all got into our battleships, and the fc brushed off the dust from his carrier.

Everyone knew exactly what their role was. Fleet composition consisted primarily of Megathrons and Abaddons, a few other bses, and one archon.....and everyone was fit specifically for dps or as a neuting bs. Except for that, all we had was an extremely leroy attitude going for us...and a Rooks and Kings triage video for inspiration.

We dropped the carrier almost immediately, and put our entire fleet out in plain view. We all knew that we would probably be going home in pods...or worse....

It took a while for the enemies to figure us out. We were patient. We were all there, come what may. Whatever dropped on us...we were going to fight it. We were that desperate, and our fc was that annoyed.

The drop was a lot bit bigger then we expected, including an archon, a thanatos and 3 moroses, as well as a support fleet consisting of mixed bses. Not only did they have more shiny ships then us...we were outnumbered, with an enemy fleet of at least 25.

But what the hell. We asked for it. 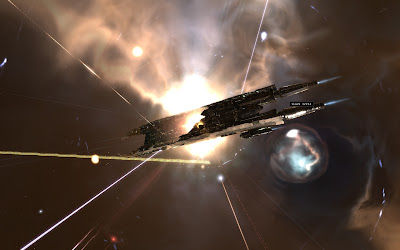 We had two fcs. One to call primary dps targets and one to call neuting targets. We also had skilled pilots with ship scanners, monitoring the status of enemy cap.

We went for the moroses first. Once they were capless, they were useless. We cut their dps down first thing.

Our triage carrier jumped into traige and started repping fleet members like mad. It was a mad keep-up with them switching targets and trying to get those outside of the rep range.

And the geddon, 2X hyperion, 3X tempest, 4X typhoons and their arazu, and other mixed smaller support ships.

We lost a megathron, a typhoon, a tempest, and a scorpion.

And called it a day.