I'm generally the kind of person that like to leroy into things--briefly evaluate a situation to make sure it's not completely suicidal, then go for it.

Unfortunately, this seems to be much more difficult while flying in null sec, as you always have the possibility of that 'cyno' ship, or the other half of the gang that's waiting a few jumps out.

Curse, a region full of pirates, thieves, renegades, miscellaneous corporations and alliances, lone plexers, and vacationers seems to have its share of 'hot-droppers.' from the -A- titan hot drops, to the miscellaneous blackops hot drops.

Hot dropping has a lot of advantages and disadvantages that must carefully be taken into consideration: 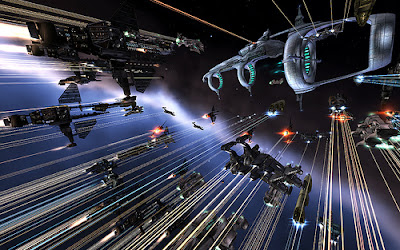 First of all, on the side of the hot dropper, it takes a lot of coordination, and often times causes the targets to scatter or run. Many times, unless you are dealing with massive fleets, it results in missing many of your targets.

A lot of times, engaging with a similarly sized fleet may promote the targets to stick around and give you a good fight.

However, it can also be a lot of fun, and also serve as an advantage point to hot drop. If you are dealing with a especially 'skittish' fleet that will not engage equal numbers, hot dropping with a good interdictor pilot on the other end may force them to engage you, though you will probably still leak targets. 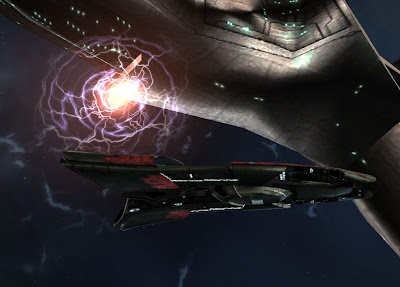 Secondly, no one likes to be hot dropped. If you are planning to live in a certain area and engage certain people quite frequently, hot dropping them over and over will only cause them to run from you altogether in the future. In a previous corporation I was in, we had mutual unspoken understanding with some choice enemies that led to some insanely fun fights...because each side knew the other was willing to give a good fight and not hot drop titans on the others' battlecruiser gang.

Hot dropping should never take the place of skill.Hot dropping is a fun thing to do but if you do it only because your fleet is full of unskilled pilots who would not be able to engage normally, it just makes you look dumb.

Hot dropping does not necessarily mean blobbing, though is a common tactic for blobbers so is often equated with 'blobs.' Hot dropping onto lone pilots on gates also makes you look dumb.

So, there are many pros and cons to hot dropping. In the end, I prefer a good old fashioned brawl.