ZOMG There's a Girl in our Corp...

After a couple months of searching, I finally settled on a new corporation and joined their ranks last night. Joining a new corp  usually is not that fun. You have to learn people's names/voices...how they do things and what makes them tick. 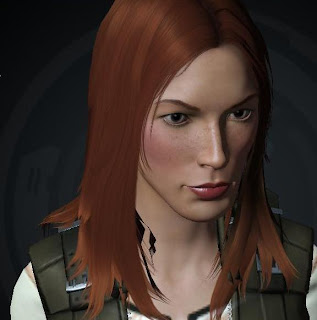 For me, being one of the few females in EVE, it is occasionally harder to get acclimated to new people. For starters, in some cases they never interview me over voice coms, so they dont know I'm a girl until I am already in their corporation (and usually getting on coms for an op.) I've learned the hard way to try to speak up before the op is actually happening...otherwise, bad things happen. One corporation, I jumped in their coms for the first time to join a fight, asked where they were or what gate they were on, and chaos and confusion ensued afterward for a good ten minutes. zomg there's a girl on our coms. The fc then usually has the hard job of getting the fleet back into control, and making sure people didn't warp off to random objects, accidentally jump into the hostile gang on the other side of the gate, or mistakenly eject from their ship altogether.

Once they are used to it, the first few weeks of being in a new corp are usually great. Guys, in general, think that girls cant successfully pvp in EVE. Therefore, the first few weeks include such pampering as frequent offers of free fittings...(usually tech 2)...and lots of free ships fit and ready to go (with their 'favorite' fit that I should try). I never have to make a run to high-sec for anything...as there's usually a dozen peons that are willing to run there for me. And, I never have to worry about logistics not doing their job and keeping my armor up in a fight. Usually, as soon as we land on any gate, I am targeted by every logistics in the gang, who has me at the top of their watch list. If I die, it doesnt matter. I make isk because at least three or four people replace my ship by either sending me isk, or trading me an actual replica of the ship I just lost.

Thankfully (or sadly, depending on what mood I'm in) I didn't have to deal with any of that with this corporation as most of them already know me. They know that I'm pretty good at shooting stuff up in Eve, and that I occasionally get lost, and go afk at gates during bio breaks.
And, they know to say "no way" when I ask if my megathron makes me look fat.