7 Things I Wish I Could Change in Unified Inventory

Edit: Many of these ideas have been discussed in the Features and Ideas section of the EVE Online Forums. You can view that thread here. I have put a '*' next to items below that are listed by CCP as being worked on for Retribution. Also, as new ideas are given to me, I've added them below.

The devil is in the details, they say. While some people may have originally thought that Unified Inventory was of the devil, I think many of us have started to become used to its quirks.

Lately, I’ve been thinking about the little stuff –pet peeves, small annoyances, or just small stuff that I find myself frequently wishing I could do or change. My list got quite large, so in this post I will be focusing on those things relating directly to Unified Inventory, and Assets.

1. I would move the Item Hanger above my Ship Bay

The Item Hangar should be above the Ship Hangar, or I should have the ability to change the order myself. I am frequently in a hurry, and would just like to quickly drag and drop items from my active ship to my Item Hangar, without having to scroll to find it if my ship menu is expanded.

I don’t know how many times I’ve quickly highlighted items, went to drag them, then realized I couldn’t do it without minimizing my ship menu, or scrolling, and have had to start all over with selecting the items…etc.

I should see my active ship first, then my Item Hangar, then my Ship Hangar.

2. I would allow separating Items and Ships into Folders.

It’s quite simple. I want to split items and ships into folders that I can then access from my left hand menu. I don’t want to use cans for items because I want to continue to be able to use the automatic fitting functionality in the fitting window.

And, I want to be able to split ships so I can more easily find what I need. I want to separate my shield thrashers from my armor thrashers. I want to separate out ships that are half fit because I’m missing some module or ammo. I want to split up my nano, long range drakes and shield canes from my short range brawlers. I want a special folder for ships I have faction fit, and another folder just for my ready-to-go Stabber Fleet Issues.

3. I would make the Menu Consistent with the Hanger...

For example, I have 10 Thrashers named Susan Black’s Thrasher. However, one of them has different ammo then the rest and I want to trade it to someone in station. I can easily tell which one has the ammo on my left menu, but it doesn't correlate to the same one in my hangar, so I have no idea which one I need to drag into my trade window...

4. I would add an ‘Empty to Hanger’ button inside all ship bays.

I want to highlight items in my ship’s bay and click a button that automatically dumps it into my general hangar. I should be able to do this in my active ship, and any other ship, or container, or etc.

I've got things to do, people to kill. I'm sick of trying to drag and drop and scroll and etc.


5. I would give the ability to change the names of Corporate Divisions directly from my Unified Inventory UI. * 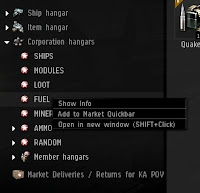 If I have the necessary roles, it seems intuitive to me that I should be able to right click, and change the name. But, changing these names is actually hidden via a button at the bottom of your Corporate window. (It took me forever to find it the other day, and I actually had to ask someone where it was.)

Furthermore, Directors should be able to change these names. Not just CEOs—but I will get into roles and titles in a different post.

And, what's with adding a corporate hanger division to my market quickbar? And...Show Info? What Info? (A blank window opens when you click this with an exclamation point...lol) 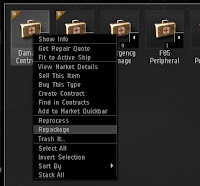 6. I would move the "Repackage" option upon right clicking an item so that it is not between the "Reprocess" and "Trash It" options.

Is CCP trolling us? 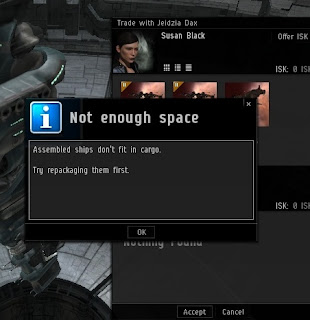 7. I would remove the ability to put items inside containers inside a trade window.

Another thing I've thought about, is the ability to see the estimated value of fully fit ships, and have it add all the modules, drones, ammunition, and etc. Right now, ship values only show the hull value, and the total estimated value of your ship bay only takes into consideration the ships' hull prices.