FW is a Sandbox, Too

When you delve into FW mechanics you will notice that Faction War, as we know and love it, is really the 'dumping together' of three distinct mechanics.

In general, these three aspects of FW have very different, predefined purposes that are only loosely connected to each other. The largest connection is really between plexing and PVP, where many people engage in plexing for the sole purpose of getting a fight. However, pvping in and of itself does not influence occupancy. (You can plex for occupancy without any pvp occurring.)

This seems somewhat limited to me, and part of my goal in coming up with an idea for FW was to increase the number of choices pilots have. Telling a pilot he must do 'this' or 'that' to achieve a specific goal seems very un-sandboxy to me.

The current system could be graphed as this: 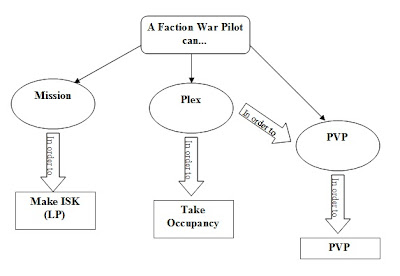 The goal? To turn the graph into something like this: 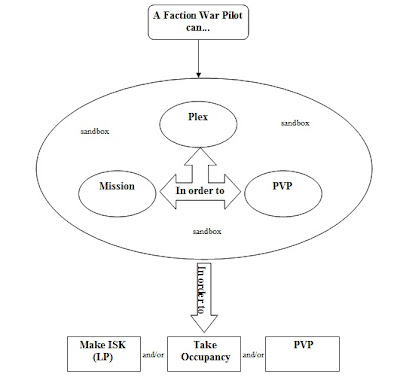 Several parts of my suggestion addressed this.

In many ways, the bottom arrow on the last graph could be drawn to point both directions: with this structure, players could plex to make isk to fund pvp, or pvp to take occupancy to gain access to missions....etc. The point being, you would have a lot of options for gameplay.

Who knows all the ways that players would go? And that's the point.