If you haven't read the general overview, please read it here.

One of the greatest hurdles of implementing tiered occupancy will be to work it into the current system. This will be a tricky endeavor, considering the current way that Victory Points and system Occupancy work.


Right now, in order to take Occupancy of a system you must achieve a certain number of Victory Points. Victory Points are only gained by offensively taking 'dungeons' (plexes) within a system. The current occupant of the system can prevent their system being taken by defending these 'dungeons.' When a dungeon is successfully defended, the attacker loses victory points from their 'tally' for that system.

Notice: Current occupants do no gain Victory Points. They defend the system by preventing the attacker from gaining VP, and by removing VP from them.


At first glance, I thought Oh, wow, this is going to be a problem --both mechanics wise, and mathematically speaking. How do we make a sovereign militia gain occupancy levels if they can't gain Victory Points? Does it even make sense, really, for the sovereign party to get Victory Points for something they already own on the sovereignty level?

However, using the current system and expanding it to scale with the tiered system, it's actually pretty simple. While on the surface level, it would appear like militias are offensively fighting for occupancy levels, the current system where there exists one defender and one attacker will actually remain in place.

First, the attacker and the defender would be based on who has sovereignty. This would be similar to how it's currently based on Occupancy.


This makes logical sense and fits with the system, as the Occupancy level of the sovereign faction will reflect their activity levels. (In this case, defense levels)

What About Non-Plex Victory Points?

Part of the system I suggest includes the ability to influence Occupancy levels through other means then plexing. This also, is quite easy when you think about it in terms of offense and defense.

Missioning - This is where things are a little tricky, because currently missioning can't really be thought of in terms of defense or offense. People don't defend missions....lol 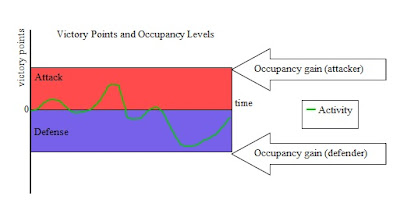 There are two, legitimate ways to approach missioning for VP.

1. You can determine that the ability to mission in a system is a benefit of having sovereignty. Therefore, the (negative) VP gained by these missions would contribute toward the idea that it should be easier to defend a system then to take it. (ie: there would ultiamtely be a purposeful imbalance between the 'opportunity' a defending party has for removing an attacker's VP vs an attacker's 'opportunity' for gaining VP.)

I'm not particularly married to either approach, and I see advantages and disadvantages to both perspectives.


Anyway, that's a more detailed overview of how the current Victory Point system could be worked into the tiered approach to sovereignty.


Related Posts:
Fixing Faction War: The Big Picture
FW is a Sandbox, Too
The Matter of Docking