A Noobs Guide to Lowsec Ninja Salvaging:
by Galdornae

Today as I was scouting for ice miners to suicide gank, a 2 day old player asked in local for 500k isk to buy his first cruiser. As the ganking business was quiet, I was in a rather good mood, and feeling somewhat charitable, I sent him 600k. Shortly thereafter I convo'd him to ask if he needed any more for fittings. He said probably, but he didn't want to ask for any more. I can respect that.

We chatted for a little bit and I linked him a PVE vexor fit. He mentioned that he would need to train for the salvager on it. This lead into a discussion of the different possible careers in eve, and I suggested the posibility of lowsec ninja salvaging.

I have long felt that ninja salvaging is quite possibly the most lurative career in the Eve for a new character. The skillpoint requirements are very low, and the payout is much higher than low level highsec missions. The main barrier for this carreer is of course not skillpoints, but knowledge.

As with many things in eve, knowing what you're doing is far more important that having a lot of SP. This guide is designed to help new players get an idea of how ninja salvaging works.


Have a friend who just started the game? If they're bored of missions, or if they want to try something more exciting with a higher isk payout, have them read this.


What ship do I use?


A tech 1 frigate is going to be your best bet. Not only is it cheap, but its small sig radius, good agility and speed will often allow you to escape if attacked.

Your highslots will of course be for salvagers. Fill all available highs, because more salvagers means fast salvaging, which will get that snazzy salvage in your hold and you safely on your way. Pick a frigate with 3 or 4 highslots. In your mid slots you'll want, for starters, a propulsion mod. I recommend an afterburner. This will allow you approach wrecks quickly and maintain a small sig radius (microwarpdrives can be used, but they increase your signature radius, allowing dirty pirates like me to hit you better. 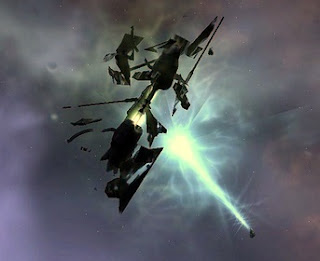 The other module you will want in your mids is a medium shield extender. This will help protect you from being instapopped by said dirty pirates.

Your lowslots are a little more flexible. I like to put nanofibers in them, but if you need more powergrid to support your prop mod and shield extender, use a micro auxiliary power core. Alternatively you can use warp core stabilizers. These won't make you quicker and more agile like the nanofibers, but if you do get warp disrupted, and not instapopped, they may allow you to escape. Consider warp stabs if you're salvaging out of range of a stargate.

Remember though, one stab won't always do the trick!

If your attacker is using a scrambler you'll need 2 in order to escape!


Where do I salvage?


The best place to ninja salvage is lowsec. You'll want to look for areas with a lot of combat taking place. This will make it more dangerous for you, but it also means more wrecks for you to salvage. Besides, your ship is cheap! Buy a stack of them and just hop in a new one if you die. If you aren't familiar with any lowsec PVP hubs, look on your ingame star map (star map tab -> stars tab -> statistics -> ships destroyed) or go to the dotlan maps at and select ship/pod kills.


What do I do when I get there?


Your main objective is to find elite wrecks. Other wrecks can still be salvaged for some profit, but only elite wrecks drop tech 2 salvage, which is where the big money is. An elite frigate wreck can drop 20-30 million isk in salvage, an elite cruiser can drop up to 100 million or more, and an elite battleship... well, if you find an elite battleship wreck you're having a good day. Note that those isk amount are what CAN drop. You won't get that much every time, but often enough that if you keep at it the good stuff will start to pile up.

To find elite wrecks, your directional scanner is a huge help. Watch this video if you don't know how to use your directional scanner. I recommend setting up an overview tab just for wrecks. Alternatively, you can just disable active overview settings. Most of the time you'll find wrecks on gates, but they can also be in belts, at planets, etc. Anywhere a ship can blow up, there can be wrecks.

Use a 360 scan to see if there's any elite wrecks in range, and then narrow it down directionally. Or if you're lazy, just warp around to gates. Also use your directional scanner to keep an eye out for hostile ships. In lowsec, expect that anyone and everyone will shoot you, given the chance. When you find a wreck, orbit it and begin scanner.

One of the most important things to remember is to always keep moving. Orbit the wreck at 2500 meters with your afterburner running. Staying moving makes you much more difficult to hit. If you're in jump range of a gate, you can usually just jump out when shot, but if you're not in jump range (but still withing 150km) consider warping out if anything larger than a frigate shows up.

Through trial and error you'll learn what to worry about and what not to. Away from gates, assume that anything that shows up, including frigates, will shoot you.


When you do get some good salvage, consider dropping it of in a nearby station before attempting to find more. I've seen salvage pilots lose 200mil in salvage because they got too greedy.

Oh, and if you run into me, I will shoot you. I'll be the flashy red guy.