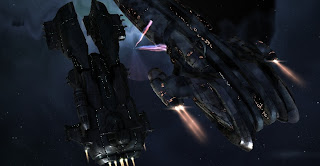 This past weekend, Wendi Wu, a member of the Amarr militia wrote an interesting article for Sovereignty Wars. In the beginning of the article, he gives an account of a situation where an Amarr fleet decided not to engage a Minmatar fleet due to a spy, and the fact that the Minmatar shipped up to numbers the Amarr couldn't handle.

He went on to describe how spies ruined other people's game-time, ruined good fights, etc. He also wrote about the imbalance of faction war fleets, and the difficulty of new people entering faction war via the NPC faction war corporation.

However, I think one of the most interesting things Wendi implies through his article, is the importance of 'the fight' to all militia pilots. He talks about spies as a hindrance to getting good fights. He talks about the Minmatar and Amarr relying on each other and needing each other for fight. It's all about 'the fight.'

Without meaning to, I think that Wendi is pointing out (between the lines) the largest problem that faction war currently faces--lack of a goal, or objective. In null-sec, they fight over systems, stations, moons, etc. In faction war, there is little to tie things together, beyond 'the Fight.'

As a result of our supreme focus on 'the fight,' everything focuses on us making pvp better. Both sides yell at the other for 'bringing too much' and ruining the fight, having spies that ruin battles, calling on neutrals to interfere in good fights, etc. The list goes on. We've beat the dead horse to pieces.

In null-sec, you bring what you can to a system to take it over. I never remember, in my years of being out there, an FCing having the attitude "lets bring less then we can so that we can win by smaller margins and have a better fight." No. It has always been, "bring everything you have so we can win, because that's what we're here for, and I'd expect the opposing side to bring no less."

For some, 'the fight' is all they want. I myself greatly enjoy this sort of 'causal' game play, where my sole purpose is to support my corpmates and write absurd little poems about my enemies. However, having something to fight for, in my opinion, would also give better fights, making my over-all game-time more fun. In the end, we would all win from it.

I will be interested to see how (not if) CCP will address this in the future, and I hope that members of the CSM will push harder for improvements, on a larger scale, in Faction War.