In an article I recently read, the claim was made that "FW used to be much bigger then it is today." This made me curious as to what sort of statistics and numbers I could find to give us a better picture of what is actually happening in Faction War.

During my initial research, I found an old website, provided by the ISD,  giving a snapshot of what Faction War numbers were like several years ago. The information on this website was last updated in October of 2009, so I will be using it to compare with current data, which is provided in the screen shot below. (Taken in-game December 4, 2011.)

Faction War Population
If we compare the data from 2009 with 2011*, we get the following figures, showing that Caldari and Gallente have grown the most over the past two years: 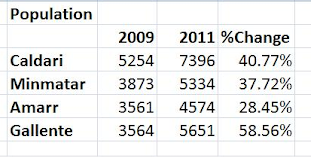 Obviously, populations change much on the month to month basis, with various factors including the joining/leaving of major corporations, eve events and expansions, as well as player satisfaction with FW. (For example, one militia could currently be in a 'slump' or another militia be on a rare growth spurt that could change the percentages some.) However, I believe it is safe to say that any implications that Faction War numbers were once larger, is clearly statistically incorrect.

Unfortunately, the ISD page did not give current total kill counts. I attempted to calculate this by multiplying the average daily kill count per militia member by total number of militia members and days since the release of Faction War. However, the results would only work if the decimals given was a current ratio of total kills to current (2009) total members, and I can not confirm this. Also, current totals are given as a fraction of a million, which are extremely rough estimates.

If calculated in this way, you get the following results: 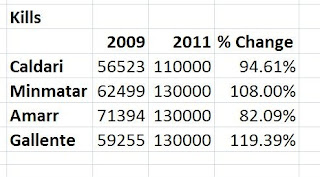 I won't go into analysis over the comparison of these, as I do not completely trust the finer-accuracy of the numbers. However, on a broader scale, I think it's interesting to look at the kill number growth compared to the population growth.

In general, the kills for all militia between 2009 and 2011 has roughly increased by 100%, whereas the population overall has increased by around 41%. Therefore, the increase in kills is not a direct result of population growth alone.

If we attribute 41% of the killmail growth to be related to population growth, we still have 59% growth left over. Though these numbers are still rough, I think it could be said that on average, more pilots are pvping (as opposed to doing other things) in faction war in 2011, then pilots were in 2009.

I wont go into details comparing kills from last week between the militias, as on the week by week basis this fluctuates a lot and it wouldn't mean much to look at just one week in this context. (A large battle one week could greatly change these statistics.)

However, I would like to look at the population compared with overall kills, on a broad scale. (Specific kill numbers are not given, so on a more detailed scale I won't really compare this.)

Right now, Caldari has the greatest population by far, and yet the least amount of total killmails by around 200k. Therefore, you could assume that many people in Caldari militia are more PVEers, or do other faction war activities as a whole besides pvp.

Another interesting thing to note is the battle fronts. If you divide the number of total kills into the current population, you get 18 for the CG front, and 26 for the MA front.

This tells me that the Minmatar/Amarr tend to have a higher percentage of pilots who are PVPing, versus their Caldari and Gallente counterparts. It is very interesting to note that even with the large difference in population between the CG front and the MA front, the MA front has more pvp by a total of roughly 200k more kills.


And Finally, On a Side Note

Just a fun statistic, though it may have several other factors influencing it including the rate at which the faction war stats are updated. Over 10% of the kills recorded on the Amarr and Minmatar boards in the past week were non militia related.


*Data does not taken into account the use of alts, spies, nor does it account for inactive characters. For the purpose of these figures, we assume that these fringe populations are the same, per capita, for each militia.