A Week of Love in the Minmatar/Amarr War 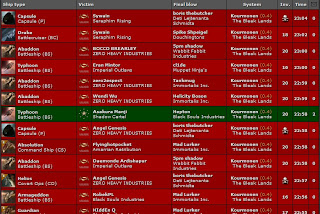 The weekend is almost upon us, and only time will tell if activities on the warzone will be as active and aggressive as they have been this past week.

I logged on last night merely 30 minutes late to this fight, where Minmatar took out two Amarr carriers, and only lost a couple of frigates themselves. I was informed that two Archons were also present on the Minmatar side, though they do not show on the battlereport.

Early today, a mixed fleet of COVEN and Amarr were dealt with harshly by a Minmatar fleet. Only hours following that fight Shadow Cartel came into the area to wipe the floor with the Amarr. I was told that the Amarr batphoned Rage alliance during the fight. They were close by in hof, but never ended up making it in time to help the Amarr.

For this week alone so far (at the time of my writing this), the Amarr sit below 50% efficiency with 268 total kills, and 242 losses.