"This is Not a Dream"


I awoke to ringing in my ears and my vision blurred. When I came to
all I saw was blood on the ground all over and tracer rounds flying
over my head. I soon realized I was in the middle of a war and I had
just been shot at by a rocket propelled grenade. Once I got my
bearings I saw a huey on a landing pad about 300 meters south east.
Bullets flying, bombs dropping and in the middle of pure chaos I
started running for it. Once I get into the huey and fired it up some
more guys came out of the wood work, shot up, looking to catch a ride.
None of use knew the ride we were about to take would put is in an all
out killzone. 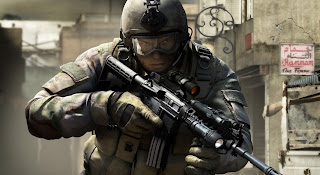 The huey took off fine, I got 4 passengers, 2 medics, an SF guy and a
gunner on the right side of the helicopter, who for some reason, never
let up off the trigger. I liked him, reminded me of the polish
soldiers when I was in Iraq, balls to the wall 24/7 BABY! Anyway, We
flew in the direction of our last objective to see if anyone needed
assistance. On the way we picked up an engineer who's tank got
destroyed by two F18 hornets. As we approached the objective I could
see gunfire on the ground, and then, the radio popped. "We need back
up on the north west corner of objective bravo NOW...." followed by
some expletives I'd rather not repeat. The problem now, I had no where
to land. Enemy tanks and jeeps surrounded our guys and there was no
way we were just going to walk in. Plus, there were F18's and an
Apache in the area just waiting to shoot us down!


"1 minute until HALO jump extraction." I yelled to the guys in my
helicopter. At this time I was climbing to gain some altitude so that
we could HALO jump into the killzone and help our guys out. "30
seconds!". Before I jump I plan to point this helicopter at some tanks
and kill me some Iranians.
"4......3.....2.....1....,JUMP!....,JUMP!,.....JUMP!...". One guy
after another jumps out of the helicopter. I point the helicopter
forward towards a group of tanks and jeeps and jump. The air was cold
and thin as I plummeted towards our LZ at 80mph. At 600ft I pull my
parachute and re-group with the rest of the CHOC I have formed.
Immediately I see a body, looks like the engineer didn't pull his
chute in time. And then "BOOM......." the building adjacent to us
falls down into a pile of rubble. Out of no where I here a whizzing
sound and I'm bleeding. I got shot in the arm. Damnit! One of the
medics came right over and patched me up good, shot some morphine into
me and I was good to ef-ing go. 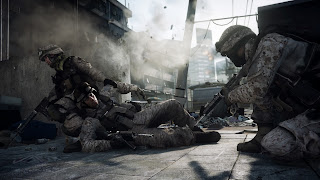 I knew then we were in the shit,.......in it real deep! We moved on
and met up with the rest of the unit near Objective Bravo. From there
I moved out on my own to find cover out in the open. This will let me
use my brand new stinger missiles I had acquired from the last
mission. Finally I could see the Apache and F18's that were bombing
the piss out of my guys. I flipped my stinger up onto my shoulder,
locked onto the Apache, waited for him to flare out, and "BOOOOOM",
good night, good game, thanks for playing. Then the F18 got it and
then,............... an explosion, so loud and so big I woke up
stunned and dizzy....! Apparently 2 tanks hit my anti-tank mines I set
on the way to where I was shooting my stingers. They left a hole the
size of a car!

With the Apache and F18's the rest was cake. 2 hours later it was over.

Email ThisBlogThis!Share to TwitterShare to FacebookShare to Pinterest
Labels: Battlefield3