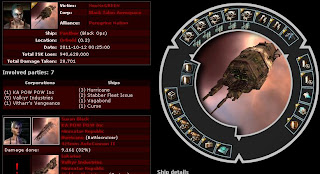 I logged onto EVE to an empty corp. Not a big surprise since it seems to be empty more often this past week, and I haven’t exactly been keeping it company much myself.

I ended up jumping on another Minmatar corp’s coms and hanging out with them for a while. I was surprised by how many people they had online. My view of Minmatar militia is pretty limited—I only pay attention to a few channels usually, and not usually the main ones.

We started out running around in huola, though the Amarr didn’t seem too interested in fighting us. We noticed them pulling out black ops and other big stuff as we got ready to leave the area, but decided to ignore them and go roaming.

I’ve been to Metropolis low-sec a couple times now the past couple of weeks. The last time didn’t end so well with my Stabber Fleet loss. We came across a few people in Orfold, and ended up blowing up their drake. We GCCed, and then got off the gate for various planets and safe spots to wait it out before moving on.

My GCC was almost over when a neutral Ishtar warped in to my planet. I was sitting at 100k so I could get out easy, if necessary, but I decided to sit there and see what he would do. To my extreme surprise, a friend of his warped in with a panther.

Wait….a panther?! I got a little excited and notified the guys on coms that there was a panther sitting 100k away from me. Sure, we’d have to GCC, but we wouldn’t have to worry about gate guns. And, a panther was a panther. It was literally worth more than our entire fleet put together.

A few eager guys prematurely warped in before I could get close enough to the panther, but it turned out to be okay. One of the other Minmatar got a point on the panther just as I got in range to put a secondary point, and the rest of our gang warped in for the kill.

Not surprisingly, local spiked. We knew we were about to get ganked---big time, so the call was made to overheat on the panther. Thankfully, panthers don’t have very big tanks, so it didn’t take too long to break him. By the time he popped, there was a large number of neutrals on the field, including a scorpion that was attempting to put ecm on all of us and save his buddy, a tengu, a maelstrom and other stuff.

It didn’t work. The panther was dead, and we quickly started to scatter. Unfortunately they caught our curse. However, with all the rest of them there, many of them sitting right on top of us, I was surprised they were fail enough not to point anyone else. We were somewhat nano, but we were still in battlecruisers and probably would have been somewhat easy to catch at point blank range. In fact, we kind of figured taking out the panther would be a suicide run at the get go---but as I said earlier, it was worth more than all of us combined.

And it was epic fun. I heard a few victory dances on coms. Some of the newer guys had never killed something that expensive before and it was really funny to listen to their enthusiasm again.

Anyway, back to watching LOST. The helicopter just disappeared. Maybe it got lost in some sort of freaky time warp.