In real life, marketers use psychology to get people to buy something. 7.99 sounds ‘cheaper’ then 8.00. Buy one get one free sounds like an amazing deal, even though the item is already highly marked up.

In Eve, you can also play into buyers’ psychology, although Eve buyers tend to react differently to things then people in real life. 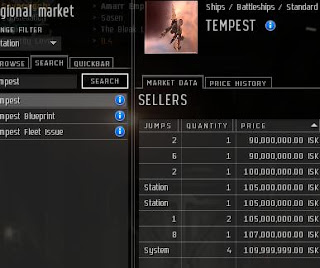 Tapping into Laziness
In Eve, you will find a lot of laziness. People don’t always want to travel to market hubs to get the best deal. People also don’t want to travel around to collect everything for one ship.

Panic
Paying attention to political changes in the area you trade in can greatly influence what you sell/buy. If there is some major hostilities going on, pvp ships and items can often go fast for unreasonable profits. People don’t care the cost, they just want to protect…whatever it is.

Also, if a corporation or alliance is getting forced out, they will often ‘dump’ on the market. It’s a great opportunities to peruse contracts, the mineral market, along with other things to see who’s trying to get rid of stuff fast. (Sometimes, you will need to hold on to things for a while and allow the region to stabilize before maximizing your profits from this, so you don’t want to invest to great a % of your trading isk into this.)

Tricking You Buyer
A while ago, I wrote about selling complimentary items to maximize your profits. One of the reasons this works well, is because you can ‘trick’ your buyer into paying a lot more than they should to fit a ship.
A lot of pilots think in terms of Isk amounts, not percentages. When they see a drake marked up 25% they see that it’s 7+ million over market hub prices and they scoff. When they see a cheap module marked up 25%, they see that it’s just 200-300k more, and they don’t really think about it much.

So, you sell the ship for a low profit margin, then sell all the mods for higher profit margins. In the end, after they buy all the mods, rigs, etc., you will still get a crazy profit! And they won’t really notice that much…unless they are very, very poor.

“I’m rich, so I’ll do what I want.”
Many times, your buyer will be so rich they don’t really care what price you have items up for. This might occur in markets that cater to a lot of ‘rich’ people, such as faction missioning hubs, and null-sec carebear hubs.

I scoffed once when a corp member bought something from my alt at a ridiculous price. I had just been experimenting with a price. The above quote is exactly what he said to me. And, his attitude is not unique.

Playing into the psychology of buyers takes a lot of research, and sometimes experimentation. It’s important to know who you sell things to, what they do in Eve, and what sort of political constraints are in the area. This will allow you to get the best market unit combinations out there, for the prices that will give you the most profits.