Myth #1 Faction War is Mostly Role Players
Truth: While faction war is a great pvp outlet for role players in Eve, the truth is a large percentage (I would even argue the majority) of militia pilots are not role players. There are many other reasons that people join various militias. 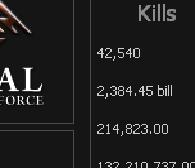 Myth #2 All PVPers in Faction War are Noobs
Truth: Most PVPers in Faction War are Noobs. Well, of course there are tons of noobs in faction war. After all, with only .5 standings anyone can get in! However, faction war is also home to some of the best small-gang pvpers in Eve—pvpers who are simply taking advantage of useful game mechanics.
Myth #3 The ‘Point’ of Faction War is to Plex and Take Over Other Militia’s Systems
Truth: While many pilots choose to plex, this is essentially a useless game mechanic that doesn’t do anything. Taking a system only changes the verbiage for that system. Other than that, there is no rewards* for taking a system.
*For a while now, many faction war pilots feel that CCP and CSM have been ignoring the faction war game mechanic, and have repeatedly suggested that some sort of reward or benefit be included in taking systems.
Myth #4 Warring Factions are Mortal Enemies

Truth: Faction war, believe it or not, has some of the ‘friendliest’ (and some of the most brutal) pvp in the game, especially in the Minmatar/Amarr war. Amarr and Minmatar militias have been known to fleet/band together to distinguish common threats. In the past, I was even part of co-militia fleets that roamed in nullsec.
While the militias aren’t exactly ‘friendly,’ they are a lot more co-habitable then alliances within a lot of nullsec politics and empire wars.
Myth #5  In Order to Join a Militia, your Character Must be that Race
Truth: In order to join the general militia corporation*, you only need .5 standings in that faction. You can be whatever race you want to be.
*You can also join militia via a player owned corporation. These corporations each have their own rules about standings as the corporation itself must uphold a certain average standing level to remain in that faction.