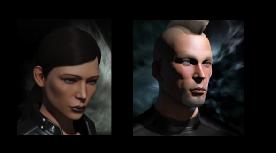 Last night, I was challenged to a 1 vs 1 frigate fight by Predator Elite, one of the primary enemy Amarr FCs.

I've done solo pvp, but never an official bonified 1 vs 1 before, so I was a little nervous. Not to mention I rarely fly frigs at all and have really bad navigational skills. (I think the mwd skill is trained to 3 or something.)

But ...it was just tech 1 frigs right? If I died in a fire it wouldn't matter a whole lot. It would still be fun.

I decided to drop the point, figuring since it was arranged it was doubtful he'd run away. Instead, I fit a tracking disruptor  I'm apparently very noob because I couldn't fit the tech 2 version and had to settle with a meta 3 I found lying around in my hanger.

We fleet up together and I run to an insta undock due to his friends camping the station. Then, I warp in for the kill.

I'm not usually over excited like some people are when they kill stuff, but this time my heart was actually beating pretty hard. I wanted to win!

He refused to engage until I had found him. For some reason, he wasn't showing on my overview, neither on my friendly nor hostile overviews. So, I had to manually find him in space. When I locked him, it began.

In a topsy turvy, round-about, roun-about mess of flashing lights we lit into each other. I quickly saw it was going to take a while to get through his tank once I hit his armor. Oddly, he had only gotten through about 25% of my shields. And...I was armor tanked.

The fight lasted at least 3-4 minutes, but felt like ages. Finally, he admitted in fleet that he had burned out his armor repairer. He was going down hard.

Until...he ran away. I was so mad, I yelled at him in fleet that he didn't honor his 1 vs 1 and he should come back and tank it like a man. (LOL) He admitted he had been spamming to get his pod out---a force of habit among pvpers.

To my surprise, he came back in. I instantly saw him hitting my shields. I had to mwd to get near, but he was dead within just a couple of volleys.

Nice to know there are pilots out there who still enjoy a good fight.