The Scheme: How I Ripped-Off 25 Billion ISK from my Alliance 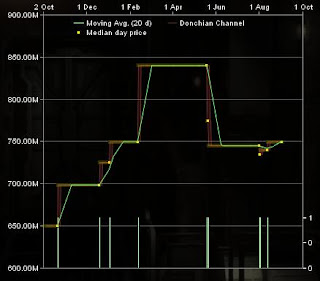 When pvp pilots are in the middle of an op, and need a fit ship NOW, they will pay almost anything for it. I found this out during my stay in Aggression. Alliance, which no longer exists.

I had started trading at least a year before, and had only been doing some small time stuff with 0.0 contracts. Sure, I’d occasionally bring a few things out and ‘experiment’ but hadn’t really build up much ISK.

You have to understand, when I started trading I had less than 100million ISK to my name. Most of that had been given to me by a previous corp member. I slowly worked on it until it was 200million, and then 500million. I didn’t have much more than that when I joined Aggression.

Due to being on satellite internet at that point, doing much pvp was not an option. I could never load the grid in time, and things lagged so bad that I couldn’t even lock things most of the time. (We’re talking bit 0.0 fleet battles where things are laggy anyway.)

So, I traded. (I also provided emergency cynos in my falcon for the titan.) It started small, where I was bringing a few things out. Logistics, in trade, is the biggest issue. We lived in several places including Curse and Immensea. I didn’t really feel right about having corp members jump stuff out for me to make money off of, so I usually offered to pay someone.

I’m not sure how it started, but I ran into an alliance member who was starting to set up a freighter ‘business’ so to speak. We worked out a deal, and within a week I had almost unlimited transportation of goods from Jita to the 0.0 system I was trading in.

Of course, he was skimming a LOT off the top. He organized the jump freighter and regular freighter pilots, and paid them. But, he didn’t pay them everything I paid him, so he was making a nice little nest egg for himself.

Needless to say, all parties in our little business were happy. The jump freighter pilots were happy to make some ISK during the down times. They were happy with what they were getting paid. My ‘contact’ was happy with his cut, and was doing some trading of his own on the side. (We were careful not to tread into each others markets. Professional courtesy at that point.) I was happy not to have to deal with logistics at all. I was paying a premium for each load, but compared to what I was making off of each load, it was pocket change.

So, I had my little business set up pretty good. All I needed was a decent trade alt with a jump clone. I would jump to Jita, purchase everything I needed, package it up, make my courier contracts, and jump clone back to my 0.0 staging system where everything usually arrived within 24 hours.

I then threw everything up on the market, and called it a day. (Yes, it was that easy. And no, opportunities do not come around like this all the time.)

During that time, things were hot in the regions we were living in. In many cases we were overtaking someone’s space, which required a lot of big battleship fleets, etc. There were a lot of battles, a lot of action, and a lot of people constantly returning to our base to reship.

I didn’t have a lot of ISK to begin with and only did a load once in a while. But my ISK gradually increased until I was jumping a jump freighter load down nearly every day. Things were selling faster than I could get them on the market. Not just modules, but stacks of ships. And I was not selling them cheaply. I was making 300-400% on some smaller items, and 20% on many ships.

At the peak point of that trading opportunity, I was easily netting a billion ISK profit every week, probably more. I was supplying the bulk of the pvp market in that station, and I virtually was doing none of the logistic work. I simply bought and sold, bought and sold.

Well, eventually things went south for Aggression., and the opportunity was soon gone. No, it was not a lack of funds that led to the downfall of the alliance. ;) It was actually the backstabbing of Atlas, which is a story for another time.

Sure, I admit that it was somewhat of a rip-off to the alliance to be charging high prices. However, there is another side.

First, I was the only one bothering to supply the market at all. Without my work, there would have been no ships to re-ship to, and we’d have probably imploded a lot earlier.
Secondly, I was running a corp shop where corpmates could get fully fit ships on contract at Jita prices. I’m pretty loyal when it comes to my corporation. Keep this in mind if you ever do any serious trading—don’t bight the hand that feeds you.

Thirdly, I was giving free ships to several of our FCs. Stacks of them sometimes. They were too broke, and too busy to make ISK, so it was the least I could do.

Fourthly, there were several pilots in alliance that were offering their services to bring stuff from empire. If people had wanted things at Jita prices, they could have gotten them pretty easily. I was banking on people being lazy.

Lessons you can take from this?