Yesterday offered a plethora of pvp opportunities. The area we live in was extremely active with both war target fleets and pirate fleets, so there was a lot to do. After living for a few months in null sec, and seeing very little action, I was excited to jump into the thick of things again. 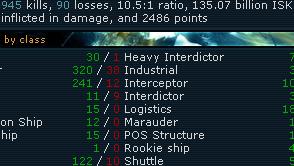 For those who are curious, I’m currently employed in faction war. I first got into it about a year and a half ago. I had done the entire null sec experience—from ceoing in one of my first null sec alliances to running an alliance shop for a huge space taking alliance later on. Needless to say, I became extremely burned out, and decided to go to empire to relax a bit. It started with me just wardeccing random corporations on my own and doing a bit of solo for a while. Through circumstances, in particular a 1 vs. 1 I soundly lost, I gained a friendly acquaintance and an invite to a chat channel, and I hooked up with the Amarr militia. I flew with them for over a year, partaking in some of the best pvp I had ever seen in the game. Not the lag fest blobs I had seen a lot of in null sec, but guerilla tactics, and Leroy fleets that resulted in small numbers performing well outmanned and outgunned.

Needless to say all good things must come to an end. Due to lots of real life stuff the corporation eventually went AFK, and slowly dissolved. I went back to null sec, but this time with much higher expectations that resulted in a lot of frustration and boredom.

In a few moments of desperation, I spontaneously joined one of my old corpmates’ new corporations. The catch was that I would be flying for the other side—the Minmatar. Due to a lot of people shifting around, I had friends and acquaintances on both sides, which makes things very interesting and gets me dubbed as a spy in more than one circle. (I don’t think people really realize how terrible a spy I would make.) But, that’s all a story for another day. ;)

So now, I must confirm what people have been telling me for years—that faction war is full of spineless noobs who can barely tie their shoes without someone telling them how. Full of a smorgasbord of carebear lemmings who’s IQs range somewhere between the IQ of a pea and a Chimpanzee. A pvp buffet on either side that a corpmate has affectionately dubbed ‘the scrubs.’

Faction war is also full of extremely good pvpers simply taking advantage of free wardecs. They tend to be in the fringes of faction war…and not always liked by their fellow faction mates, but they are there.
Anyway, yesterday was another full day of pvp that resulted in some emo raging corp quitting, as well as some extremely verbose trash talk in local. (Not by me, but by some of the people we killed.)

After being stranded in a station for a while, I successfully baited some station gamers resulting in an Abaddon kill. The pilot resultantly left the militia in a fit. It was probably due to the fact that a short time before killing his abaddon, a friendly militia rupture had killed his dramiel. (Along with killing his friend’s slicer and getting his other gang member’s cynabal into half structure…solo. And they say good solo pvp is dead.)

We also had another ranged fight with our usual enemies. The first engagement resulted in us running away, and losing a hurricane due to the fact we couldn’t shoot them as far out as they were. (We caught a few of them before they burned away.) I made it out with 20% structure left. They were too far away to point me…doh. We quickly decided to do something about this entire ‘burning away’ nonsense and all jumped into long range battlecruisers. This time, we had no Gallente back up and were either outmanned or at least equally matched. We soundly held the field through two or three engagements, losing very little and killing several of their gang including a rapier. At one point I was primaried, and promptly warped away as my borrowed long range drake reached armor.

There was some losses on our side, as well as some great kills. Overall it was a fun fight, and I think that it was good that the enemy FC forced us to get out of our comfort zones a little. However, you can’t play the same trick a hundred times without your enemies coming up with appropriate countermeasures…so hopefully he will smarten up and try something new next time.