Eve Online and The American Revolution

One of my favorite movies is “The Patriot” starring Mel Gibson. Of course, the moment where Gibson’s character takes his son’s flag and goes riding up alongside the militia is an awesome scene, even if you’re not very politically minded. 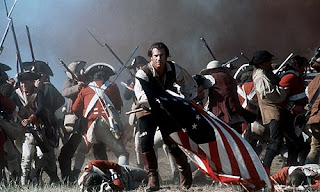 However, there is some other cool stuff I am fascinated with in this movie including how they contrast the ‘old’ ways of fighting with the ‘new.’ The militia were not trained soldiers. Many were farmers protecting their homes, and fighting for their rights. In a face to face battle, they would not fare well, and had to resort to more guerilla tactics as a means for engaging the more highly trained armies.

Okay, okay, so what does this have to do with Eve Online, you ask?

I’ve played Eve now for four years, and have noticed that there are two types of general pvp.
First, you have your big, null-sec pvp where everyone usually gets on the field and fights it out. This happens in empire occasionally as well, but I think it’s largely a tactic done in null-sec suitable for taking systems, eliminating an enemy presence, etc.

Then you have your smaller gang warfare, which tends to be faster gangs in smaller ships. This style of pvp is general more suitable for engaging smaller fleets, eating away at the edges of an army, piracy, catching ‘small’ stuff and generally causing a nuisance.

While either type of pvp has its pros and cons, each applies its use of strategy and tactics differently. In a large fleet, the FC and commanders are relied up for coming up with and executing strategy. The fleet members follow commands, while operating within their part of the strategy. (Logistics, DPS, etc.)
In small gang warfare, while you still may have an FC, each member often contributes toward creating and executing the strategy and tactics of the fleet in a more direct manner. Often, individuals must make split-minute decisions which will greatly change the outcome of an engagement. In large null-sec fleet fights, the actions of one member rarely turns the tide of an engagement.

Okay, so maybe comparing Eve Online pvp with tactics used in The American Revolution is stretching it. I admit-- it was a rabbit trail my mind took me on while writing something else a few days ago. However, I think it’s a pretty good analogy. I also admit that now, whenever I watch The Patriot and see the large, polished armies marching across the field, I occasionally hear my old 0.0 FC in my mind. “Everyone warp to the gate!!” And when Mel Gibson’s character, and his sons are whisping through the trees popping off British officers, I can hear my current corpies…”quick, gank that hurricane that is off gate before they know what’s going on!”