Silver and Gold: How the LOTRO Economy Could be Improved

In every game that I play, I have this tendency to gravitate toward the market or 'trade' side of things. In some games, the economy is relatively simple, or ultra controlled. In others, it can be somewhat more complicated.

After playing Lord of the Rings Online for a few months, (off and on) it was no big surprise to me when I started hanging at the auction house, scanning for trends and researching ways to make some quick gold. I admit, I wanted a deluxe house with all the trimmings, so I had some motivation for making some easy gold. 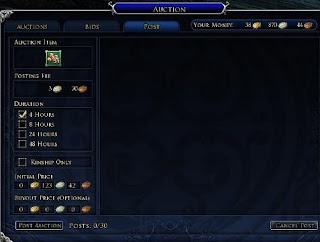 Unlike the EVE Online economy, the LOTRO economy is much more simplified. You still have the ability to produce goods out of raw materials and then sell in an auction type setting, however, you are not given many options. You are limited in the number of auction houses available in game (usually no more then one per region) and all auction houses tie into the same 'pool' of auctions. (So what you see in the auction house of one region is exactly the same for all other regions.)

Also, there is no concept of location in the economy. You bring your product to the auction house, put it up on a post, and someone could buy it in a completely separate auction house and immediately have it show up in their mail box. Therefore, you have one mass economy, and not one that is separated by in-game locations.

Also, because there are multiple servers in LOTRO instead of all players sharing one identical world, the economy could be different depending on what 'world' you're on. The supply and demand couple be different based on what type of players are on the server, and since you can not transfer your characters between worlds, there's no way to use this to your advantage or sell things cross-worlds.

After playing with the markets and economies in several mmorpgs, I think that several things could be done to improve the one in LOTRO:

1. They could open the use of the auction house to a broader player base. Instead of having to 'buy' auction house slots in the LOTRO Store, they could make this a part of the base game, encouraging people (even new players) to engage in trade more easily. 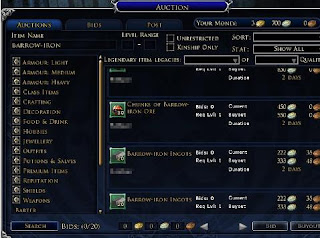 3. They could make crafting more user dependent and less Supplier dependent. Right now, in order to build most things, you will need to buy certain random supplies from a suppliers. If all the ingredients for crafting an item were collectible via natural resources or craftable themselves, there would be a higher need in crafters to trade among themselves.

4. They could do away with the limitations on crafting (where you have to choose a profession) and instead make crafting harder. You could make it so that anyone with the right tools/recipe/level could make an item, but it's really hard to get levels..etc. That way, people couldn't just train everything and burn to the maximum level immediately. (I leveled my Farmer up to Artisan level in less than a day.) Instead, people could focus on different aspects of the crafting system...preparing materials to be built by others, crafting certain types of things, etc. If it was hard enough to train it up, people would focus on things in the same way we're being forced to now. Also, the things we craft would be useful to more then just ourselves, and would drive up player interactions in the economy.

5. They could do away with 'Bound' items, so that more options for the market were available. I get tons of stuff in quests I cant use, and just throw away to a NPC because they are bound. This is pretty much a useless in-game restriction. While some items, such as tomes, etc, I understand, things such as horses and clothing/armor received in a quest, etc. should be freely marketable.

Overall, I think that if they increased the need for inter player trade, made it more harder and more profitable, it would be a huge improvement. At some point, I'm going to get bored of making easy gold on the LOTRO markets, and that will be less game-time playing for me, as well as less Turbine points I'll be inclined to spend.