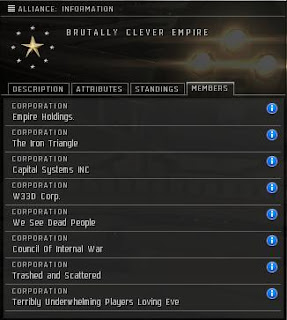 After a long period of dormancy, the alliance appears to be waking up a bit. With over 200 members currently, they are showing some activity in Delve and surrounding low-sec, though do not appear to be friendly to any major entities.

The outlook is not great, judging by a few of their loss mails. Perhaps instead of jumping right into 0.0 space, they should teach their members how to fit a drake, and give them better probing ships. However, I suppose if they got into any real trouble, their partially fitted revelations could help them.

So basically, PL got paid to allow a noob alliance into their space, that they are still allowed to shoot at (but not invade.) Best plan for populating targets ever. Pay us to come live here so that we and our allies can use you for target practice.