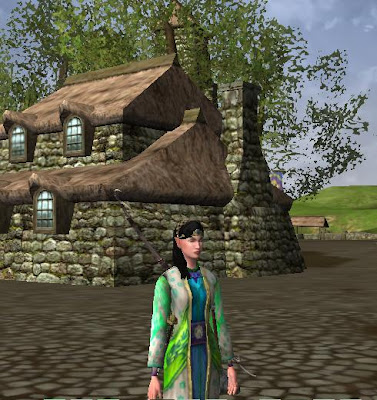 So far, I've been in two kinships in LOTRO. I left my first one because it didn't seem to have any purpose...no one really talked to each other or did anything. I was recently invited to a new kinship and decided to give it another try. Within the first few days, we had already done a Great Barrows run, and there were many other team-up opportunities.

Kinships, from what I can see, are basically like LOTRO's version of a guild, or (as in EVE) a corporation. However, I haven't found evidence that people take them as seriously as they do in other games. I have seen bands of minstrels in Bree doing music together...and have heard that many kinships have such 'gatherings,' but so far have not completely discovered all the benefits to having a kinship.

One great benefit to me is having friendly people to ask questions. Considering the leader of my current kinship is a hunter elf same as me, but is a much higher level, she has had all sorts of good advice to give me.

Email ThisBlogThis!Share to TwitterShare to FacebookShare to Pinterest
Labels: LOTRO