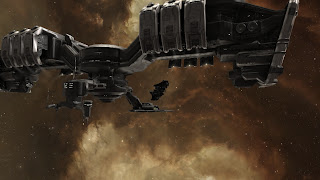 It was a heated weekend in Faction War. (I feel like I’m starting to sound like a broken record, so until further notice, you can just assume that the FW warfront will more or less always be ‘hot’ for a while.)

I logged on Friday to find out that Lamaa had been taken by the Amarr. They’ve been hard core going at it (plexing) for quite a while, so it wasn’t a surprise. We had hoped to have a fun battle over the I-HUB, but unfortunately it was taken outside of Late Night’s time zone, and day fleet was unable to procure the numbers to remotely compare to what the Amarr brought, according to the dayfleet FC.

In fact, numbers were interesting to watch this weekend. With hundreds of active pilots piling into the Amarr, I think the Amarr’s number issues are far over. In fact, it has a few Minmatar leaders a little concerned, and considering recruiting for the Minmatar, as over and over again this weekend we found ourselves vastly outnumbered. It could just be a timing thing, as activity often seems to ebb and flow for us.

During an engagement on an I-HUB in Raa, the second system the Amarr took this weekend, there were well over 100 pilots in local, and only a little over 20 in the Minmatar fleet. Ironically, a portion of the fleet was actually dayfleet, who were pulling a late night of their own. (no pun intended) Needless to say, we attempted shipping up, using a disco BS to break through their destroyer mob, as well as a few other things that mostly just caused them to run away.

We somewhat disbanded after that, a few of us chilling on coms and roaming around checking out gates and plexes. Later, we had a small engagement with one of the non-Fweddit gangs around. Unfortunately, we thought we had more than we did.

One of our BCs jumped into their 13-15 man fleet (which comprised of 2-3 ruptures, cynabal, slicer, thorax, 1-2 merlins, arbitrater, crow, catalyst, and a blackbird –ouch!) Needless to say he was toast, and we probably should have just let him be toast. Instead, we jumped another BC in, and I leroyed in with my Stabber Fleet from a jump and a system warp away. We had one or two others on field at some point, though I couldn’t find reference to them on the killboard so they probably didn’t engage. (Possibly because of Blackbird.)

At any rate, I never saw more than 3 of us on field at one time, so the whole thing turned out to be a failed Leroy. Instead of really having a fight, we more or less got ganked one and two at a time. We lost a Harbinger, Brutix, and my SFI.


That same night, a gang of Ka Pow Powers (and Punchy from Valks) went at a Fweddit gang in Kourm. We had around 5 BCs, and they must have had at least 25+ frigs, dessies, and other stuff. Punchy and I lost our BCs, but we managed to wipe out a lot of their fleet in the process.

I won’t go into the details of every skirmish or battle. However, it was nice to see that FW is still a hot bed for small gang stuff. While we had multiple ‘larger’ engagements, a lot of fun was had by a few of my corpies and alliance mates just fooling around as a loosely organized small group, camping gates or attacking other small groups in plexes. We spent a little time earlier in the day doing some offensive plexing. Between that and the LP from PVP, I easily made enough to replace a few fleet stabbers, with some left over to donate to a few I-HUBs.

While the Amarrian hoards will probably continue to grow, and become a little more dangerous as more and more of them get organized and gain experience, I’m still optimistic that the general nature of the low-sec setting, and restrictions put on FW plexes will keep FW from becoming an all-out blob-fest.

Battle Reports/Killmails Related to This Post:
BC Leroy (Amarr Board)
SFI Loss

Ka Pow Pow vs. Fweddit (Showing a lot of unrelated activity from earlier, but the only battlereport I could get it to generate.)
Hurricane Loss to Fweddit