The Math Behind the Backward Strategy


Azule over at The Altruist wrote an interesting response to my recent post on some ‘backwards’ strategies that have been arising in Faction War as of late. He gives three scenarios that could potentially arise from game mechanics that encourage the loss of systems for monetary gain. I won’t go into the details, and I suggest you read his post for yourself.

Corelin, a new Caldari FW pilot who writes the blog Mad Haberdashers also had a few things to say about this strategy, which you can read here.

For those who like to see hard numbers, rather than verbiage about what is or isn’t more lucrative, here is the situation in all its mathematical glory:

It takes approximately 150 plexes to plex a system from 0 to 100%, with no hostile interference. We can estimate that this number will double, as for every hostile who defends a plex in system, you have to do an additional plex to make up for it. (And defense does happen, if even for just fun fights.)

Taking a System is Lucrative

Once a system is owned, the max upgrade is 5. This means that the max discount to medical clones, taxes, etc. will be 50%.

There are also non-monetary benefits such as being able to dock, bragging rights, station slots, etc. Many take advantage of the industry slots (which compared with what you can already find in nearby empire systems is no deal breaker) with neutral alts. Docking rights, while important in key home systems, have largely not been a motivating factor of system acquiring, especially in systems that have no station. ;)

At 85 million skillpoints, my clones cost 20 million ISK. (The average SP of most FW players is extremely less than this.) Pretending that the Minmatar are all 85 million SP players, we’d have to purchase 1,420 medical clones in one system before the discount benefits would match the income acquired (by Minmatar)in plexing the system during its hostile state.

In order for market order discounts to match the income acquired (by Minmatar) in plexing the system during its hostile state, you would have to put up 37.866 BILLION ISK worth of NEW market orders.
A general PVPer putting up 100million ISK worth of random modules on the market will save a total of 3.75 million ISK.

Warzone Control is the primary factor that controls LP store prices, as well as LP payouts. The nutshell version of warzone control mechanics is this:

Each system is worth a potential of 6 points, 1 for ownership, and +1 for each upgrade up to 5 upgrades.

Warzone Control tiers are hard line thresholds. (You either get there or you don’t, nothing is pro-rated in any way.) The Minmatar/Amarr ‘threshold’ is 84 points. (70 Systems * 6 Potential Points / 5 Tiers)

Therefore, you need the following ranges to acquire the given Warzone Control Tier in the Minmatar/Amarr Warzone:

Note: Since you need 84 points to reach warzone control 2, you can own all the systems in the warzone and not reach this level if you do not upgrade any of them.

Mathematically speaking, a certain number of systems are REQUIRED before you can possibly get a Warzone Control Tier level. (For example, if you own 10 systems and upgrade these all to level 5, that would leave you with 60 points which doesn’t meet the first 84 point threshold!)

The following is a table of the minimum systems required for each Tier:

The following chart shows the break up between each Tier, with the x-axis illustrating the number of systems owned. As you can see, as you acquire more systems, the cost of upgrading systems to maintain a certain Warzone Control level tapers downward. 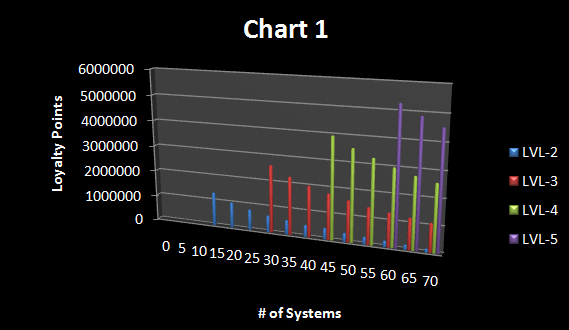 
A Matter of Control

Since Warzone Control is based on thresholds, with maintainability becoming easier as you gain more space, every system you own on top of the minimum you need for the WZC LVL you’re attempting to keep becomes a sort of ‘buffer zone.’

For example, if you are trying to maintain only Warzone Control 2, and you have 30 systems (which is 16 more systems then you need for the minimum) it is extremely easy to maintain the warzone, only needing the bulk of your systems at 2 and 3. If you have 14 systems, you must maintain every system at upgrade lvl 5 to keep your warzone control lvl, making it very difficult.

Currently, the Minmatar own 58 systems, and usually maintain a Tier 4 Warzone Control. The Minimum number of systems needed for Warzone Control 4 is 42. This means that we have 16 buffer systems, which is actually quite large.


What Susan is Trying to Say

Comparing the monetary value of owning a system with the potential income of plexing it while hostile, knowing that defending is monetarily pointless and knowing that the risk factor of losing a handful of systems from a 16-system buffer is relatively small, it is only common sense for the Minmatar to enact the strategy of giving up systems for the purpose of monetary gain.

The being said, it is also more monetarily lucrative for the Amarr to give up systems and take others, as opposed to defending every system that they have.

Therefore, the ‘struggle’ in Faction War becomes which Faction can take systems faster than the opposing Faction.

If both sides have a relatively even number of active pilots, and yet the Minmatar have only 12 systems in which to offensively plex and the Amarr spread themselves between 58 systems, who do you think should be able to flip systems faster, just as a matter of natural course?