"A soldier will fight long and hard for a bit of colored ribbon."  ~Napoleon 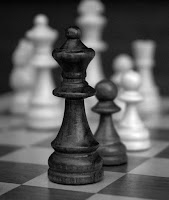 For years, Faction War has lived off of pvp-driven pvp. While in original days there were bloody battles over Occupancy, this waned as pilots began to realize that there were no benefits to having your Faction's name in the left corner of your screen.

When I joined Faction War two years ago, every fight was pvp-driven. For a year, we fought on the gates, and on the stations, in a variety of ships. We discussed strategies and ship fittings amiably with our enemies in an almost pvp-playground setting.

While this 'fightclub' setting can be very fun for a while, it also has the tendency to go stale. Fighting the same people for months and years means that you eventually come to know your enemy very well. As this happens, fights tend to trend away from spontaneous engagements of fun pewpew, and tread more into the realm of mind games.

During such a time, I had a conversation with one of  the Minmatar's Euro FCs. "If I know who's gang it is, I pretty much know what to expect." he said, referring to the fact that he had fought several Amarr FCs so long, their actions had become predictable. What was also noted was the realization that his own actions were probably also predictable to them. What followed was a careful dance, as each side observed the other, looking for any surprises and attempting to 'fool' the other into engaging. Most cases led to a stalemate...a common setting within the Faction War warzone before Inferno changes were announced.

For years, Faction War pilots have asked for meaning. This more recent staleness, however, greatly increased concerns that without something to fight for, FW would one day dry up. Most times, PVP-driven pvp is not self sustaining, and can not be maintained forever without some boredom setting in.

When CCP announced the changes they were making to FW in Inferno, they did more then give FW meaning. The very act of giving the mechanic meaning meant a shift from pvp-driven pvp to goal-driven pvp. While this will lift FW out of the doldrums, and revitalize the game mechanic, it also means that current FW pilots will need to adapt to a completely new pvp mentality.

In many ways, the early stages of the Inferno war will be survival of the fittest --and those most easily able to adapt will come out on top.