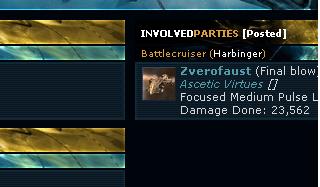 “I feel really bad about shooting you.” An old friend said to me a couple days ago.
I laughed.
He continued shooting.

I think one of the greatest challenges in rejoining faction war was to decide which side to join. My old corpmates had dispersed long ago, and I had friends on either side. Finally, it came down to a night when I was particularly discouraged at the lack of activity in my null sec corporation, and an off handed invitation from Galdornae to join Ka Pow Pow.

I applied. The transition was immediate as I had not been given any roles. Probably not enough leadership online to give them, or they were just too preoccupied with their ship spinning.

Shortly after joining, several old corpies became active again. Their direction as far as going Amarr/Minmatar has varied, proving to be interesting.

Most people would just shrug. With big alliances and corporations, it’s not uncommon to someday find yourself on the other side of the guns of an old corpmate. However, Locus was different. We were a pretty tight-knit group of players, so shooting them and being shot by them is very strange.

However, that’s not the only ‘friend turned enemy’ situation I’ve found myself in since returning. (Nor is it the strangest.)

Back in 2008, I left my alliance to join a small pvp corporation, along with several other members of my alliance. There was an individual that made the transition with us that my brother (who was playing at the time) and I grew pretty friendly with. We even chatted with him out of game.

He was a great FC, though we usually did Leroy-small-gang stuff. He was also just a nice, honorable guy. After our corp fell apart due to various reasons, we ended up going separate ways. I kept in contact off and on, but eventually stopped seeing him log in at all.

Until I joined militia and saw him chatting in a joint fleet chat. (I was Amarr and he was Caldari at the time.)
And, in more recent days when I see his name popping up in my ‘comments to be moderated’ list on my blog. “First General” has responded (again) to your post!

He sold his toon, and is truly not playing Eve anymore. But every time I see the name, I can’t help hearing a little bit of a Texas drawl, and remembering the old days.

*After writing this post, I had a run in with a few x-corpmates. One of them challenged me to a 1 vs 1. I didn't win, though he only had about 20% structure left himself when I was done with him.