I was convinced to shoot a POS today...for the first time in probably years. "We'll probably get a fight while we're shooting it..." ..etc. among other claims that have not yet turned out to be. 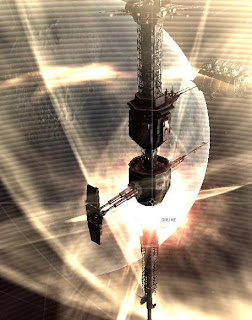 There are pros and cons to shooting poses...mostly cons. The pros, though, include the random stuff people say and do on vent when they are that bored. (I feel really bad for the super big alliances that have strict coms during those agonizing pos shoots.) Somehow, my corp gets a really big kick out of the text-to-voice feature on ventrillo.

Some other pros are that it gives me time to write. Alt-tab ftw.

And, I can catch up on Facebook, and update all my buildings in Lord of Ultima...which...by the way...I'm gaining ground in.

The cons to shooting poses...are really too numerous to list, and generally fall into the category of the fact I'd rather be soaking my eyeballs in acid and drinking a shards of glass/borium cocktail.

Anyway, I'm getting ready to graduate from college and go on vacation, so EVE and video games in general have been pretty low on my priority list. Which brings me to another 'pro' ...it's really easy to get homework done during a pos op...though it's usually just as easy during a gate camp and I'd rather be shooting things that could potentially shoot back....like the random neutral some corp mates got that had a faction mod fitted to his hauler.